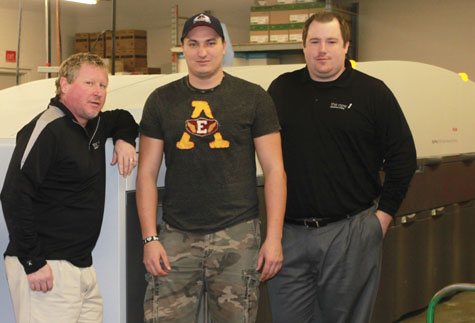 Impressions Printing of St. Thomas, which has been serving the southern Ontario market for 40 years, announced its late-2012 installation of a Kodak NexPress S3000 to expand variable-data and full-colour toner production.

Before installing the NexPress S3000, Impressions Printing had been running toner-based applications through a black-and-white Kodak Digimaster system. “We are now able to handle all of our digital work under one roof with both the Kodak NexPress and Digimaster platforms,” stated Cory Stuart, Director of Impressions Printing. “Whether it’s direct mail or variable printing, postcards or flyers, we can produce practically every print-related product that our customers request,”

“We’ve used the clear gloss quite a bit on applications, especially for postcards and brochures,” stated Stuart. “Some customers are now contacting us directly with digital work just for these enhanced features. It’s allowed us to tap into new markets we couldn’t reach before, and we are even moving some offset jobs over to the digital press.”

Impressions Printing claims to have grown its business by 75 percent over the last three years. The commercial printer now runs three shifts, seven days a week.