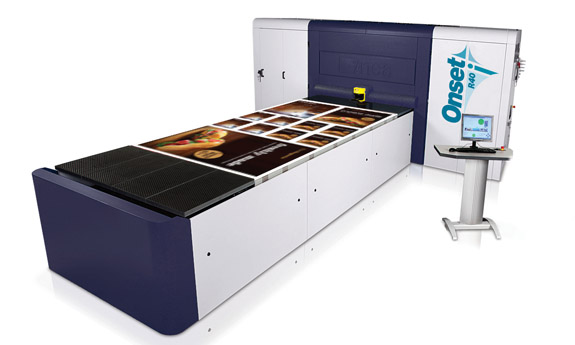 At FESPA Digital 2014, taking place in Munich from May 20 to 23, Inca Digital will debut its new Onset R40i UV flatbed printer, which is exclusively distributed worldwide by Fujifilm.

The Onset R40i uses Fujifilm’s Dimatix Spectra print heads to deliver a 14-picolitre drop size and at 400 square metres per hour. Based on Inca’s Onset Scaleable Architecture platform, the new Onset is available with a range of colour options (CMYK, Lm, Lc and white).

Customers will be able to modify their machines from a 4-colour configuration to five, six or seven colours (up to eight ink channels, including two for white ink). They can also later adopt other key elements for the printer, such as the UV curing lamps, automation, speed modes, electronics and software.

A choice of uni-directional, bi-directional and high-quality print modes can be selected depending on specific job requirements. Onset R40i produces a maximum output resolution of 1,200 dpi on media of up to 3.14 x 1.6 metres (123.6 x 63 inches) and up to 50 millimeters (two inches) thick, at the rate of up to 80 full-bed sheets per hour. The new Onset also supports Inca’s Print Run Controller software for variable data printing.

The Onset R40i is compatible with Inca’s flexible automation system, which gives users the choice to operate manually, or with semi or three-quarter automation. At FESPA Digital, visitors are able to see the Onset R40i running with a new full automation system, as a result of an integration between a Hostert automated feeder and alignment table and Inca’s proprietary material loader and take-off system. This combination, according to Inca, allows for continuous printing with a variety of material types and sizes commonly used within the display, POP and sign markets.