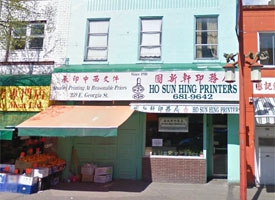 The Vancouver Sun has profiled one of the oldest printing companies still operating in Vancouver, Ho Sun Hing Printing, founded in 1910 by an early Chinese immigrant, a former cook for the Canadian Pacific railway.

Operating decades-old metal-type letterpress machines (including several pieces which date back to the turn of the 20th century), the company is slowly winding down business as its owners, the Lam family, look to retire.

The author of the piece, John Mackie, describes stepping into the shop being akin to being transported back to 1910. Ho Sun Hing Printing is believed to be the first Chinese print shop in Canada. Over the years, the company relocated several times, finally settling in its current East Georgia St. location in the early 1960s.

Owner and matriarch Hilda Lam says the company can no longer operate through creating high-end letterpress print. The company, in addition to possessing lead type equipment acquired when the Vancouver Sun and The Province moved away from the process, also has a set of 8,000 Chinese characters.

Click here to read the full article and view the video by the Vancouver Sun.