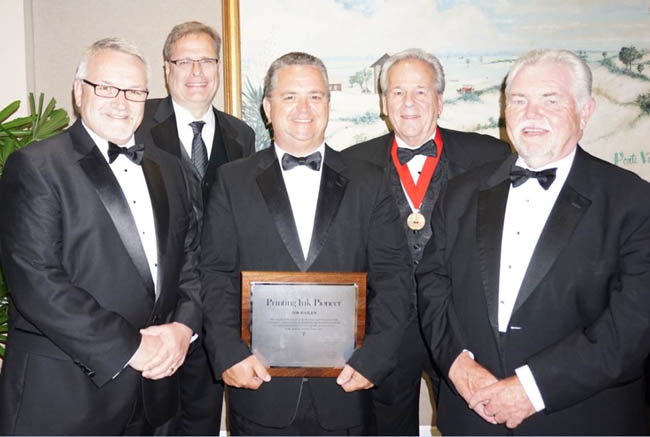 Jim Bailen of INX International received the NAPIM Printing Ink Pioneer Award acknowledging his achievements during a more than 30-year career in the ink industry. Serving as INX’ Vice President of Engineering since 1999, Bailen was the lead project engineer for every major facility expansion and equipment installation instituted by INX over the past 20 years.

In 1984, Bailen joined CPS, the in-house ink division of Sullivan Graphics in Dunkirk, New York and began work as an Electrical Supervisor in the Maintenance Department. Sakata INX acquired CPS from Sullivan in 1990, and it later became part of the INX International family. INX International, owned by Sakata INX, is the third largest producer of inks in North America with over 15 facilities in the U.S. and Canada.

In 2004, Bailen oversaw completion of the new modern metal decorating facility in Charlotte, North Carolina, that produces ink for customers around the world. Four years later, he did the same for the new liquid ink plant in Homewood, Illinois, that produces water-based technologies. New media mill grinding equipment was introduced at these facilities, which INX describes as a pivotal outcome led by Bailen.

“Jim has pioneered many developments over the years and truly deserves recognition for his contributions to the industry,” said Rick Clendenning, INX President and CEO. “Without him in this role, we would not be where we are today as a company with our world-class manufacturing facilities.”

Bailen is credited with pioneering the development of intrinsic production safety devices for ink production equipment, introducing the Nip Guard Safety Interlock System that assures no 3-roll mill at INX can be run in cleaning mode.

Since 2004, Bailen has served on the NAPIM/ANSI B65 Equipment Safety Committees that has developed several safety standards, including the 3-roll mills, to help guide equipment manufacturers to construct safer machines. He also established the development of the INX TPM elements for planned maintenance and early equipment planning within the company, which included the training of maintenance personnel at all facilities.

Bailen has actively supported NAPIM for many years. In 2002, he presented at the NAPIM Manufacturing Symposium a paper on “Equipment automation and data collection system designs”. The same year, he began serving on the pilot committee for the Manufacturing Symposium and did so through 2004. He also served for two years on the NAPIM Equipment Safety committee and presented a paper on the “Failure Mode Effect and Criticality Analysis”, at the NPIRI Technical Conference in 2006.