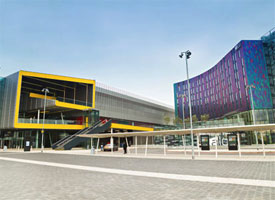 In a response to numerous companies pulling out of the show, the organizer of next year’s Ipex has announced changes which will see the show shrink by two days as well as 40,000 square metres.
Informa Exhibitions says the changes will be a part of a fresh focus for Ipex to integrate Cross Media, making it “the only international event that brings together the whole print and media supply chain.” Part of this change is reducing the show floor size from 100,000 square metres to 60,000 square metres.
“Informa Exhibitions is 100 percent invested in Ipex 2014 to ensure we respond to supplier and industry feedback and deliver a world-class international event that truly reflects and addresses the needs of the market it represents,” states Informa Exhibitions Managing Director, Peter Hall. “Ipex 2014 will reflect the medium-term future for graphic communications in developed markets as well as emerging markets in the coming years by placing a clear emphasis on digital and cross media technologies, strategies and solutions to effectively promote the power of print media and its integration in the marketing mix.”
The latest two companies to pull out of the London show are Komori and Kodak, with Kodak’s Chris Payne, Director and Vice President of Commercial Marketing, announcing its withdrawal this week:

“As the marketing landscape shifts, Kodak and other major suppliers are taking a different approach to connect with customers more often and more effectively. After much discussion with our customers and Kodak teams around the world, we have altered the marketing mix to include a higher number of customer engagement activities to help them make decisions. To that end, Kodak will not exhibit at Ipex 2014 in London and will significantly reduce its participation in conventional trade shows.”

Komori, which made an announcement last week, stated:

“Although Komori announced that it would exhibit at Ipex 2014 in May 2012 during drupa 2012, Komori Corporation and Komori International (Europe) B.V. have reconsidered participation in Ipex 2014 and decided to not exhibit. The decision not to exhibit has been taken after organizing internal meetings and discussions with customers as well as by investigating market developments within the EMEAR (Europe, Middle East, Africa and Russia) region. In Europe Komori will further evolve their successful events such as individual demonstrations and open house events as well as supporting their European distributor network participating in local graphic trade shows.”