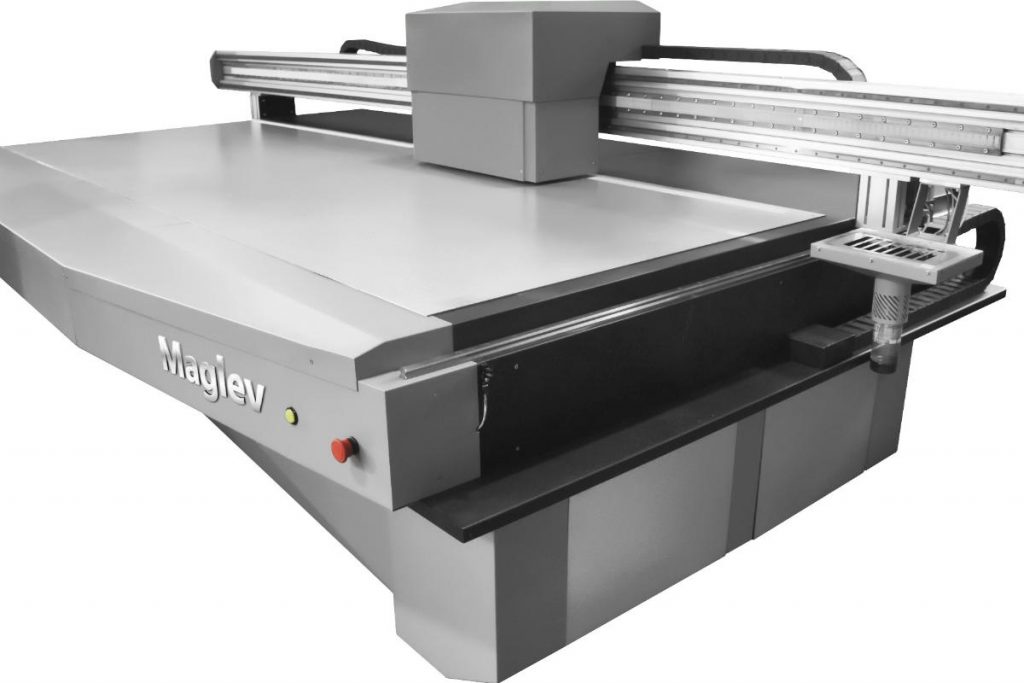 The Maglev 1228 can accommodate heavy materials up to 400 kg, including stone, marble and glass.

IQDEMY Holding, which operates in the inkjet arena, is showcasing its recently introduced Maglev 1228 UV-LED printer at Fespa 2017 (May 8 to 12, 2017) in Hamburg. Maglev 1228 features a print table of 1.2 x 2.8 metres and can accommodate heavy materials up to 400 kg, including stone, marble and glass.

Its honeycomb table is divided into six vacuum zones operated independently to help reduce power consumption when only some parts of the table are used. The UV-LED printer is equipped with levitation technology, which enables printing without noise, according to IQDEMY.

The printing system uses eight different dot sizes achievable via a combination of Variable Dot technology and Technology of Invisible Dots. Able to print with eight colours (CMYK+W+LM+LC+V) the Maglev also has a white ink recirculation system and 10 tanks for ink supply featuring ink level sensors. Its LEDs, according to the company, can operate for up to 10,000 hours without having to be replaced. The printer comes with a warranty for up to five years.

Another feature of the Maglev 1228 is its ability to produce layered printing. This is sometimes also referred to as 3D-print in the large-format sector, as different amounts of ink layers enable a haptic feeling, thus images and prints, for example wood reproduction.

“Maglev 1228 is our best solution in the context value for money,” said Vladislav Mirchev, CEO of IQDEMY. “Maglev 1228 has been designed especially for medium scale production. Advertising, including signboards, backlit projects, exhibition booths and POS, among others, are its primary application. In addition, the UV-LED printer enables printing on glass, furniture, stone, wood, marble as well as metals.”