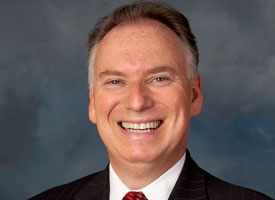 Jeff Jacobson, recently Chairman and CEO of Presstek, has left his position to head up Xerox Global Graphic Communications.
Jacobson served as Presstek’s President and CEO since 2007 and also became Chairman in 2009. He was responsible for guiding Presstek through the recent global financial crisis, as well as through the release of the company’s flagship 75DI press. He will be replaced by Stanley Freimuth, who will take over effective next Monday.
“I am thrilled to be joining Presstek,” said Freimuth in a statement. “I want to thank Jeff Jacobson who has done an outstanding job of steering the company through the most difficult waters in the memory of our industry and emerging still on course and once again picking up steam. I look forward to working with the amazing team at Presstek as together we help our customers succeed by bringing them the best digital solutions in the marketplace.”
Presstek CFO, Jeff Cook, also departed Presstek, taking up the position of Chief Financial Officer at Schweitzer-Mauduit International (SWM), a specialty paper manufacturer which deals with applications such as cigarette paper and hemp straw.
Jacobson’s new role at Xerox will have him lead the company’s worldwide strategy, operations, product development, marketing, sales and support of Xerox’ production systems.
Jacobson, prior to joining Presstek, also led Eastman Kodak’s Graphic Communications Group. He also served as President of Kodak Polychrome Graphics, a joint venture between Sun Chemical and Kodak.
Print this page