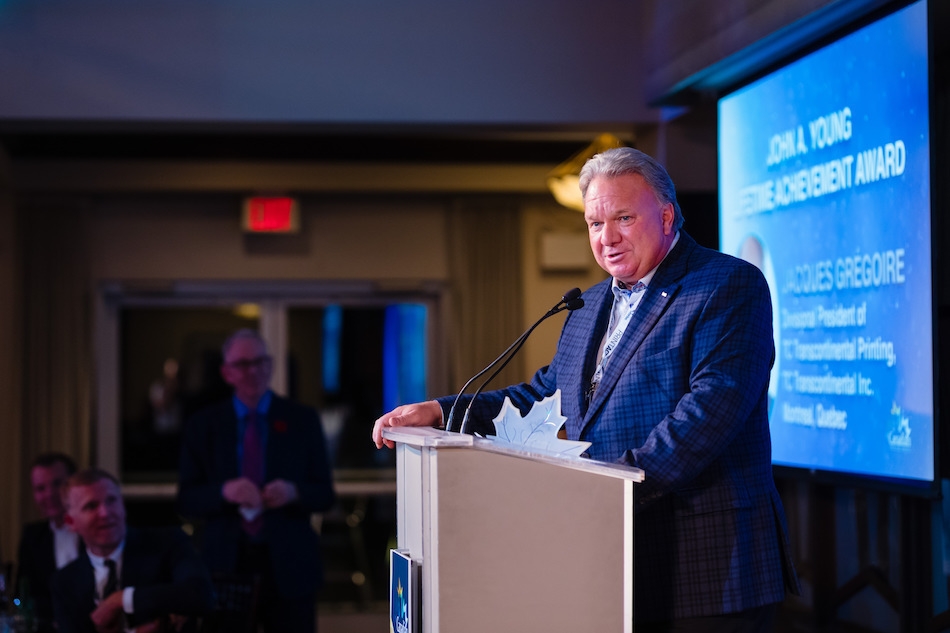 Couldn’t attend this year’s gala? See our video highlights from the evening.

Jacques Grégoire is President of TC Transcontinental Printing, Canada’s largest printer, since 2014. In the scope of his duties, he is responsible for the daily management of the company’s printing operations. A seasoned manager, he has close to 40 years of experience in the printing industry. Grégoire’s professional path began at IBM Canada. After earning a diploma in sales and marketing from IBM University in Atlanta, he returned to Canada to work for the multinational corporation in the greater Montréal area.

Two years later, during the 1980s, Grégoire joined the family business, Imprimerie L’Éclaireur, in Beauceville, for which he developed the U.S. market. In 1986, he founded his own plant, Interglobe Printing Inc., in Beauce. The following year, TC Transcontinental acquired his company, simultaneously marking his beginning with the Corporation. Over time, Grégoire held various strategic management positions within TC Transcontinental’s growing printing operations. Thus, until 1998, he served as President of Interglobe Printing. He then became Vice President of the Book Group until 2008.

In November 2008, he was entrusted with the role of Senior Vice President of the Magazine, Book and Catalogue Group, until 2014. His in-depth knowledge of the industry and his wide-ranging experience in the company made him a key player in many significant transactions completed by TC Transcontinental, namely the acquisition of Quad/Graphics Canada Inc. Without question, this renowned executive distinguishes himself through his solid leadership and is recognized by his peers for building highly skilled and talented teams.