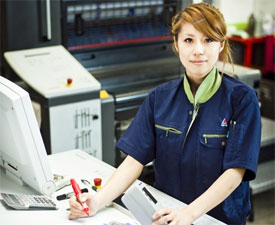 Press operators from Japan, Finland, Belgium and Germany shone at the 41st WorldSkills competition, which took place in London, UK, from October 5 to 8. The event featured more than 1,000 participants from 51 countries competing in 46 different disciplines.

Ito has been employed by the Asia Printing Corporation in Japan since 2008 and, in 2010, she won Japan’s national championship in the printing category. Silver Medal winner Susanna Virtanen works at a print shop that forms part of the training institute in Turku, Finland, which is equipped with a Printmaster PM 52 four-colour press. Alongside her job as a printer, Susanna is a college student in the Finnish town of Jyväskylä.

Bernhard Nahm, a member of the management team at the Print Media Center in Heidelberg, was one of the judges assessing the performance of the young printers in London. He was delighted at the success of the female contestants. “Heidelberg has had an impressively high proportion of female printing trainees for some years now. We are currently training ten young people to become printers and four of these are highly motivated young women. The next WorldSkills competition will return to Germany for the first time in 40 years – and perhaps one of our trainees will once again be a finalist in Leipzig in 2013,” he said.

Heidelberg sponsored the offset printing category by loaning two Speedmaster SM 52 five-colour presses for the competition. The machines were then sold to British customers at the end of the event.

At the last WorldSkills Competition in Calgary in 2009, Canada’s Simon Beauchamp finished with a Bronze Medal.