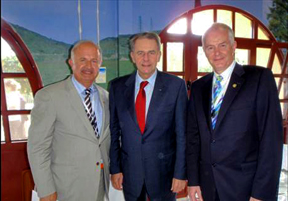 George Kallas, President of Vancouver-based Metropolitan Fine Printers, is part of the Governor General of Canada’s delegation that traveled to Greece for the official handover of the Olympic flame.

The Olympic flame was lit on Thursday in Olympia, Greece, signalling the beginning of the flame’s long journey to open The 2010 Olympic Games in Vancouver. Journalist Jeff Lee described the ceremony in the Montreal Gazette: “At exactly 12:39 p.m. local time, a strong sun showed up, allowing high priestess Maria Napfliotou to light the flame in the Temple of Hera, and kick off the start of the longest national torch relay in Olympic history.”

When the flame arrives in Victoria on October 30, 2009, it will begin the longest domestic Torch Relay in Olympic history, reaching 1,030 communities on a 106-day journey across the country – 45,000 kilometres.

Kallas will take part in several ceremonies over the next week as the delegates and Governor General Michaëlle Jean prepare for the official Olympic flame handover ceremony on October 29 at the Panathenaic Stadium in Athens. Metropolitan Fine Printers, founded by Kallas in 1977, is one of the official printing suppliers to The Games. Met is one of the few printers in the world to print UV with 10-micron Staccato, using a 10-unit manroland 700 press.