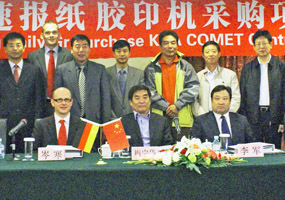 German press maker Koenig & Bauer continues to make inroads into the Chinese offset-press market, including its most recent deal to install a 3-tower KBA Comet with the Beijing Daily Group by summer 2010.

As North American and European markets for press sales all but evaporated for manufacturers in 2009, KBA made a clear effort to push into the Chinese market by having a 900-square-metre booth at China Print and the recent completion of an 11-day seminar tour across the country. These initiatives helped KBA to keep its 2009 export level stable at 83.4 percent, relative to 84.2 percent the year prior.

The German company’s press exports into Asia and the Pacific Region increased from 19.1 to 23.5 percent, while exports into North America and Europe decreased to 7.9 and 34.8 percent, respectively. (In 2008, 52.2 percent of all KBA exports went into Europe.)   While at China Print in May 2009, which had over 70,000 tradeshow visitors, KBA states that it signed around 20 orders, mostly for its flagship Rapida 105 press. Shortly after the show, Shanghai Dadong Printing signed a contract to bring the first Rapida 75 – launched at drupa 2008 – into China. KBA states there are now a dozen 29-inch Rapida 75 press lines in operation or soon to be installed in various Chinese cities. 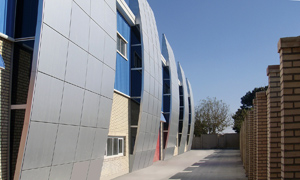 Much of KBA’s success in the market can also be attributed to its annual traveling seminar series, with the 2009 version wrapping up this October – in Harbin, Zhengzhou, Wuhan, Wuxi, Dongguan and Taibei. A company statement about Chinese progress explains, “The economic and financial crisis notwithstanding, 2009 has been KBA’s most successful year to date in the Chinese market… [it] became clear that sales this year would break all records, with almost one-third of KBA’s sheetfed output destined for China.”

For a number of years, Goss International (now buoyed by the July 2009 share-based investment from Shanghai Electric) has led the way into China in terms of web-offset presses. Just last week, KBA announced a major web deal with Beijing Daily Group, which is purchasing a KBA Comet – with three reel stands, three towers and one folder – to focus on producing a free Beijing subway newspaper, launched in 2008. Three more printing towers are to be installed after the press is up and running, which is scheduled for summer 2010. Earlier in 2009, KBA signed a deal with China’s Dazhong Daily Newspaper Group for a 2-section Commander press line to print the Dazhong Daily – with a weekday circulation of 400,000 copies.

KBA is also building a press presence in many other emerging print regions, as detailed below with notable 2009 deals, beyond China: