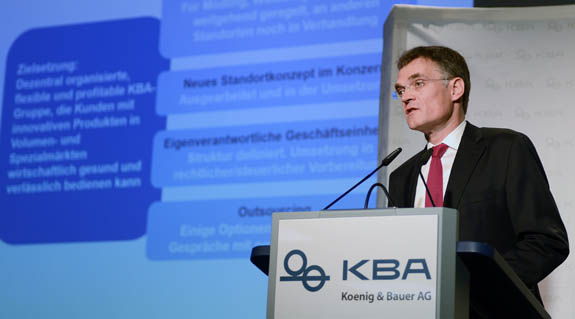 Claus Bolza-Schünemann, CEO of Koenig & Bauer AG, reported on the Fit@All program to restructure the German press maker, which is to be presented in one year’s time at the next Annual General Meeting of shareholders.

A day before the AGM, Koenig & Bauer AG (KBA) also announced Mathias Dähn as its next CFO, succeeding Axel Kaufmann who is leaving the company. Born in Munich, Dähn (46) holds a doctorate in business administration and has extensive experience in controlling, purchasing, M&A, and optimizing commercial processes. He began working with MAN Group in 2005 as director of the group controlling the sale of Manroland. From 2011 to 2013, Dähn was CFO at the Austrian lighting manufacturer Zumtobel.

The Fit@All program for KBA’s restructuring was put into place at the start of KBA’s 2013 fiscal year. Yesterday, Bolza-Schünemann updated shareholders on its measures, goals and current status. He reported that between 1,100 and 1,500 jobs from the company’s current figure of approximately 6,200 are to be cut as part of Fit@All’s measures. KBA plans to finish its workforce reduction schedule by 2015, stating operational layoffs are unavoidable.

Currently, voluntary cancellation and phased retirement agreements, as well as social wage agreements and social compensation plans, were agreed upon with union and workforce representatives for around 700 employees at the company’s sites in Mödling, Ternitz, Trennfeld and Würzburg. An agreement and arrangement is also in place for the plant in Radebeul, Germany, which will see a reduction of 180 jobs. Negotiations regarding the necessary cut in payroll by 200 employees at Frankenthal/Pfalz due to capacity and earnings remain ongoing.

“We aim to achieve an overall cost base at which group sales of €1 billion will lead to appropriate earnings,” stated Bolza-Schünemann. “We do not want to go overboard with cost savings or shrink beyond recognition, which is why the expansion of potential growth areas is a further pillar of our realignment.”

In terms of potential expansion, Bolza-Schünemann referred to KBA’s interests in special applications like banknote and “digital printing”, metal decorating and coding, as well as its new subsidiaries KBA-Flexotecnica and KBA-Kammann. These two acquisitions from last year are involved in flexible packaging and the direct decoration of hollow containers, respectively, which Bolza-Schünemann points out as being growth markets not previously served by KBA.

KBA, as a part of Fit@All, also plans to produce a “new site concept” and to outsource more activities that lie outside of the group’s press-related core competences, which the company describes as sheetfed offset, web offset and special presses. KBA is preparing a new group and management structure with the goal of becoming what the company describes as a decentralized and flexible press-manufacturing group. Again, the company’s full restructuring plan is scheduled to be introduced at its next AGM in 2015.

When discussing KBA’s 2013 fiscal year, Bolza-Schünemann stated the demand for web presses for newspapers and commercial printing, as well as sheetfed offset, remained considerably below expectations. KBA’s traditional offset business saw a decrease in order intake of 9.3 percent to over €1 bn. Group sales stood at around €1.1 billion, approximately €200m below targets.

KBA posted an operating profit of €24.5 million and pointed to required 2013 special payments of –€155.2m for provisions as part of the Fit@All program. KBA group generated a pre-tax loss of -€138.1 million.

“Strengthening KBA’s lasting profitability and competitiveness are the focus and goals of Fit@All,” stated Bolza-Schünemann. “It is clear that we must sustainably restructure our core business with web and sheetfed offset presses as well as realign capacities to new market conditions. The expansion of new growth areas is also a key aspect of our program.

“We are convinced that we will be able to harvest the fruits of our realignment in 2015 and that the group will return to sustainable profitability by 2016 at the latest.”