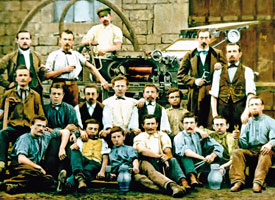 KBA’s production facility in Frankenthal, Germany celebrated its 150th year on August 18. Founded by Andreas Albert, a master craftsman who qualified under Friedrich Koenig and Andras Bauer, the plant was established as Schnellpressenfabrik Albert & Hamm in Frankenthal.

Albert died in 1882 and the business was continued by his sons Aloys and Hubert Albert and then included platen, lithographic, letterpress, collotype, metal decorating and publication cylinder presses. The company grew to be known for its rotogravure press line, the Albertina and the Super-Albertina.

KBA bought a minor interest in the company in 1978, purchasing a 49.9 per cent interest from the Rhineland-Palatinate regional government during a period of international press maker consolidation. The stake was increased to 74.99 percent in 1988 eventually forming the Koenig & Bauer-Albert group in 1990.

Frankenthal grew until the mid-2000s, at its peak, it was installing as many as ten big gravure press lines a year. The plant also drove web-offset and folder technology such as the Compacta line of web presses.

With declining orders, KBA sold its rotogravure business to Italian manufacturer Cerutti in 2007. Since 2002 the workforce at Frankenthal has seen some of the deepest cuts, dropping from 1,361 to 656. In June of this year, KBA announced plans to divide Frankenthal into two limited companies: an engineering entity, which will remain attached to the parent, and a manufacturing entity, which would be independent and be allowed to bid for non-press-related contracts.