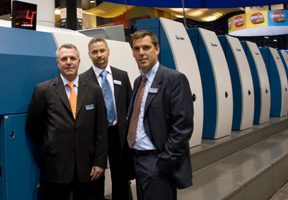 At PRINT 09 in Chicago, KBR Graphics Ltd. introduced its expanded sales team with the addition of press-sales veterans Lawrence Robinson and Martin Lapointe. Based in Montreal, KBR is a national distributor for KBA presses, among other printing technologies.

Based in Dallas Texas, KBA North America named KBR Graphics as its exclusive Canadian sheetfed press distributor, excluding British Columbia, in April 2009. The agreement, involving KBA press brands like Rapida and Genius, as well as responsibilities for parts and service, continued a 5-year relationship between the two companies.  At the time of the new KBR-KBA agreement, KBR Graphics announced it would absorb existing staff from KBA’s Canadian division, as the press manufacturer moved into its recently opened Dallas headquarters.

As a result, KBR’s new Executive Director of Sales, Lawrence Robinson, has been involved with KBA presses in the Ontario market since he joined KBA in mid-2007, where he ascended to the position of VP of Sales for Canada. Lapointe, who becomes Directeur de comptes for KBR Graphics, has also been selling presses for several years, primarily focusing on the commercial printing sectors of Quebec and Canada’s Eastern provinces.

Founded in 1977 by Karl Belafi Sr., KBR Graphics in addition to its press assets also focuses on the sale and service of post-press technologies. Also at PRINT 09, KBA North America named Mark Hischar as its new President and CEO, effective October 1, 2009.