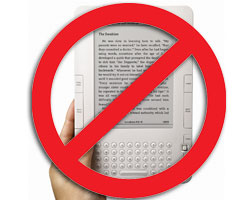 Amazon announced today that its Kindle e-book device will be launching in over 100 new countries starting on October 19, but Canada is noticeably absent from said list.

“We have millions of customers in countries all over the world who read English-language books,” said Jeff Bezos, Amazon.com Founder and CEO. “Kindle enables these customers to think of a book and download it wirelessly in less than 60 seconds.”

When a Canadian attempts to order the device, he or she is greeted with the following message: “Unfortunately, we are currently unable to ship Kindles or offer Kindle content in Canada. We are working to make Kindle available to our Canadian customers as soon as possible.”

The Kindle will be reaching developing nations such as the Democratic Republic of Congo and Sri Lanka and will have access to thousands of English-language books and dozens of international newspapers. The service will also cover most of Europe and even Australia.

While Amazon does not explain why Canada was excluded from the international launch, some have speculated it is due to a lack of a sympathetic wireless carrier in the country or the lack of publisher co-operation.