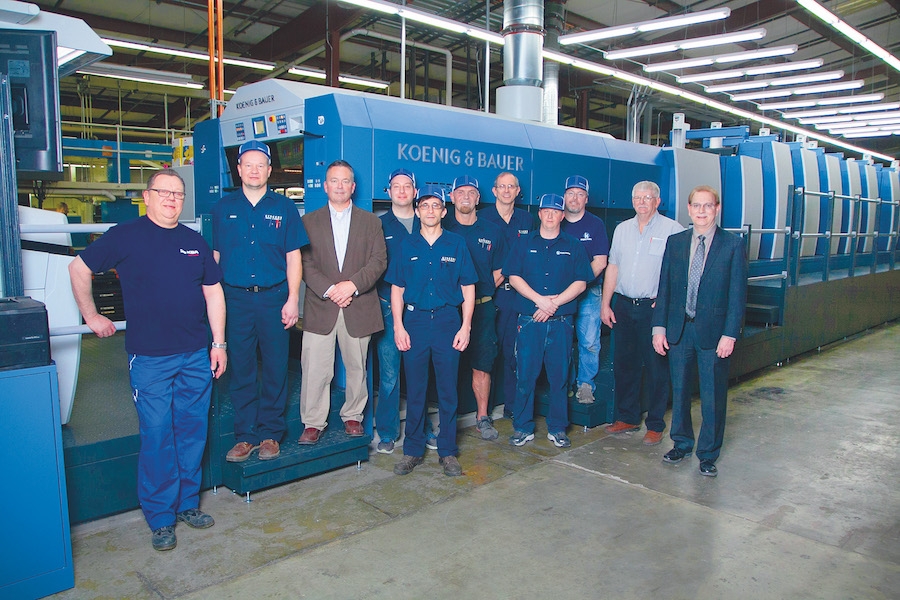 It was December 2017 when the family-owned firm that specializes in print-driven products and services, such as catalogues, publications, marketing collateral and book production, took delivery at its headquarters facility in Effingham, Ill. Since then, the firm says it has experienced higher quality and accuracy, over 50 percent increase in net press speeds, “significant waste reduction, and incredibly fast changeovers from job to job in under eight minutes.”

“As we celebrate this milestone in our company’s history, we maintain our founding vision of continued investment in the latest technologies and superior customer service that have contributed to our company’s success,” says Michael Kingery, President of Kingery Printing, who oversees the firm as a second generation owner. “Our customers demand the highest quality available in the industry today at a price that can compete with printing companies located all over the world. We take great pride in staying ahead of the competition by investing in equipment that delivers the highest quality at the fastest speeds.”

Steve Korn, Koenig & Bauer Director of National and Key Accounts, adds, “This new Rapida 105 PRO press investment made by Kingery Printing signals that the largest independent downstate Illinois printer has chosen to invest with Koenig & Bauer to provide access to higher technology for its existing and growing roster of clients. We are certain that this new Rapida 105 PRO perfecting press will efficiently drive more jobs and volume through Kingery Printing’s production facilities, fuel ongoing growth, and continue Kingery Printing’s high quality and on-time service for many years to come.”

To maintain its steady growth, Kingery chose to invest in a new highly-automated press from Koenig & Bauer, which replaced three older presses. The Rapida 105 PRO produces jobs either straight or perfecting at 15,000 sph, 50 percent faster net speeds than was previously possible, the company explains.

“We had only had the Rapida 105 PRO in our pressroom for less than six months and we were already reaping the benefits of its automation and unique features,” says Kingery. “The Rapida is equipped with the combination of Koenig & Bauer inline QualiTronic Color Control capability and System Brunner Instrument Flight print quality measuring system. The Rapida’s inline color control and register control of both sides of the sheet are all computer controlled and linked to prepress, thus quickly getting the press preset for operation. This has reduced makeready in comparison to previous presses exponentially. The lightning-fast makeready in under eight minutes is truly incredible to witness day in and day out. The inline colour control also provides detailed reporting and measurement documentation to pinpoint the accuracy of each sheet as it is printed. Its camera system reads both sides of every printed sheet on this perfecting press with the same high quality camera that is found on Koenig & Bauer’s currency press models.”

On the front end of the new Rapida 105 PRO, two non-stop fully-automatic feeding options are in place that allow for either sheets or paper from rolls to be fed into the press with no operator intervention. Printing from rolls has enabled Kingery to realize paper savings of up to 30 percent. To the delight of press operators, the Rapida’s auto-plate loading system has also contributed to reducing makeready time. All of this top-flight automation has reduced waste significantly by as much as two-thirds, making this one of the greenest assets in the Kingery Printing arsenal, it says.

With Kingery’s array of customers, the firm was challenged to print on a broad range of substrates from lightweight paper to heavy board stock. It was necessary for its new Koenig & Bauer press to offer the flexibility and quality to tackle these demands. The Rapida 105 PRO is designed to print 40 lb book substrates up to 28 pt board as well as on specialty substrates such as plastics, synthetic paper, and label stock, which will allow Kingery to open new markets.

“As we celebrate our 50th anniversary in business, I have to thank and send gratitude to the numerous employees who have helped us get to this amazing milestone,” says Kingery. “We’re a Midwestern-based firm focused on our customers; we are people of our word. We have maintained the same values that my father, John Kingery, promoted when he began the business.”