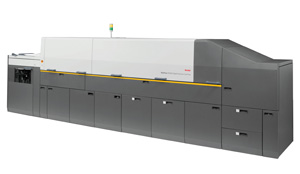 At PRINT 09, Eastman Kodak plans to highlight its new toner-based NexPress SE3600 press, which is a new version of its S 3600 model first launched at drupa 2008. The SE-designated machine includes the Kodak Intelligent Calibration System, which involves using a “scanner to capture and analyze colour output and feed critical data back to the system for closed-loop colour calibration.” The S and SE models both run at 3,600 A3+ sheets per hour, translated as 120 pages per minute.

The company also plans to highlight its S10 Imprinting System, formerly referred to under the Stream printhead banner. The S10 itself is now being sold under the brand name of Prosper. This continuous inkjet engine system operates at 305 metres per minute with a resolution of 600 dpi.

Kodak is also highlighting its new Versamark 700 Print Manager front-end, which currently supports the VL2000 inkjet-based machine. Future versions of this controller will be applied to the full Versamark line (six models) and ultimately the Prosper press.

In the CTP arena, Kodak is showcasing its new Automatic Pallet Loader for its Magnus 800 platesetter family. The company claims this system can load a pallet of up to 600 plates without operator intervention.