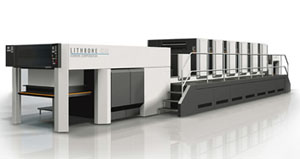 KHS-AI is based on self-learning functions that memorize any changes that the operator makes to CIP4 information and uses that information for subsequent jobs. KHS-AI is continually learning the conditions of the press to keep it operating at peak efficiency. A console-integrated spectrophotometer informs the operator when colour deviates, as a scanner automatically updates the inking program to compensate for the next job.

Komori also plans to stress its recently introduced Print Quality Assessment technology, which the company describes as a full-sheet, on-press scanning instrument to detect, locate and report any defects during printing. The technology uses high-speed cameras to photograph every printed sheet as it is coming off the last cylinder in the press. The photograph is electronically compared to an okay sheet. Deviations are reported via a visual alarm and either a tab is inserted in the load or multiple deliveries are used to automatically sort the load.

The company also plans to highlight its Spica 29P, which is a convertible perfector now available with a fifth unit. As well, the press comes standard with an automation package applied to critical makeready mechanics like perfecting changeover, plate change, and roller and blanket wash, among other automated features.