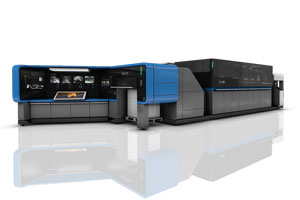 Landa Corporation, after making a big splash at drupa last year, has been relatively quiet about its progress in commercializing its Nanographic Printing presses. Today, the company announced new developments in its first production machines, the S10FC and S10C, as well as a timeline to release.
Landa says it plans on shipping beta units of its S10FC press, aimed at the folding carton marke,t by Q4 2014 and will ship the S10C press, aimed at the commercial and publishing markets, shortly after.
The design of the press has also altered substantially since it was shown last. The large touchscreen display, previously mounted to the front of the press, has been moved to the delivery area, forming what the company calls an Operator Cockpit. This redesign stems from feedback the company received from its prospective buyers, of which there are 400 who have signed letters of intent to purchase, and supplied a reported $10,000 for the opportunity.
Landa also announced other enhancements, including new ink ejectors which increase print quality that “match offset resolution and grey levels.” The press also features an advanced paper handling system that supports both paper and plastic substrates and a continuous paper feeding and delivery capability to load and unload without stopping operations. Landa has also announced an optional conventional inline coating unit that will support flexo rollers and plates, as well as UV and aqueous coatings.
“We have been working closely with our customers to ensure that our Nanographic Printing presses will provide the performance, print quality and feature set for high-speed production,” announced Benny Landa, Chairman and CEO of Landa Corporation. “In addition, the new Landa Operator Cockpit will set a new standard for operating any production press, whether digital or offset.”
Advertisement
Print this page