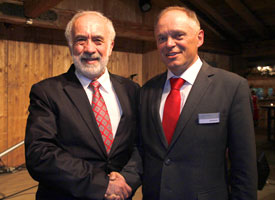 While the technology is still at least a year and a half from commercialization, the company will be showing off running samples of its machines at drupa.

Officially announced today is a lineup of six machines, three for each of sheetfed and web platforms. The sheetfed platform includes a B1 format (40-inch) machine, which, according to Landa, will print 13,000 sheets per hour. The company claims its technology does not require precoating of paper and can print on regular coated or uncoated stock.

Landa’s technology involves a high-precision inkjet firing onto a blanket, which optimizes its transfer onto the substrate. The claimed benefit of this process is that the edges of dots are more accurately defined, due to less bleeding onto the paper. 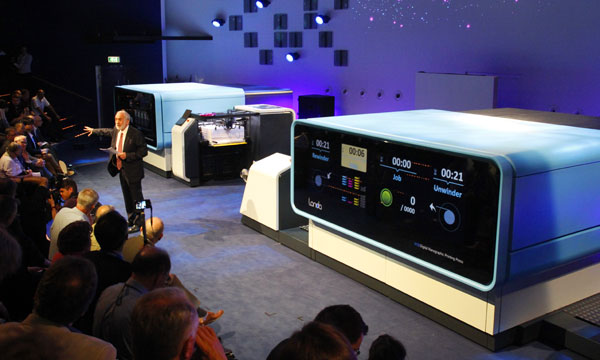 The machines also feature a large display which is aimed at press operators to easily operate more than one device via its touchscreen interface. Press personel can also control operations remotely using an iPad. The surface of the display also serves as a place to check colour: operators can hang a printed sheet directly on the front of the machine, then employ a wireless spectrophotometer to analyze and make adjustments as necessary.

Core benefits listed also included power efficiency due to its quick-drying, water-based, inks which require no drying. Landa says the machines will have “unmatched” total cost of ownership, but said it was premature to reveal pricing. Landa said that he expects machines to sell at prices comparable to “high-end offset presses.”

Benny Landa also commented on his company’s partnership strategy, making a comparison to the growth of Xerography after the technology was adopted by 3rd party manufacturers. No information has been released about specific applications on the part of the three partners. Landa said he intends to focus on providing consumables for the new Landa-powered machines built by Komori, manroland, and Heidelberg.