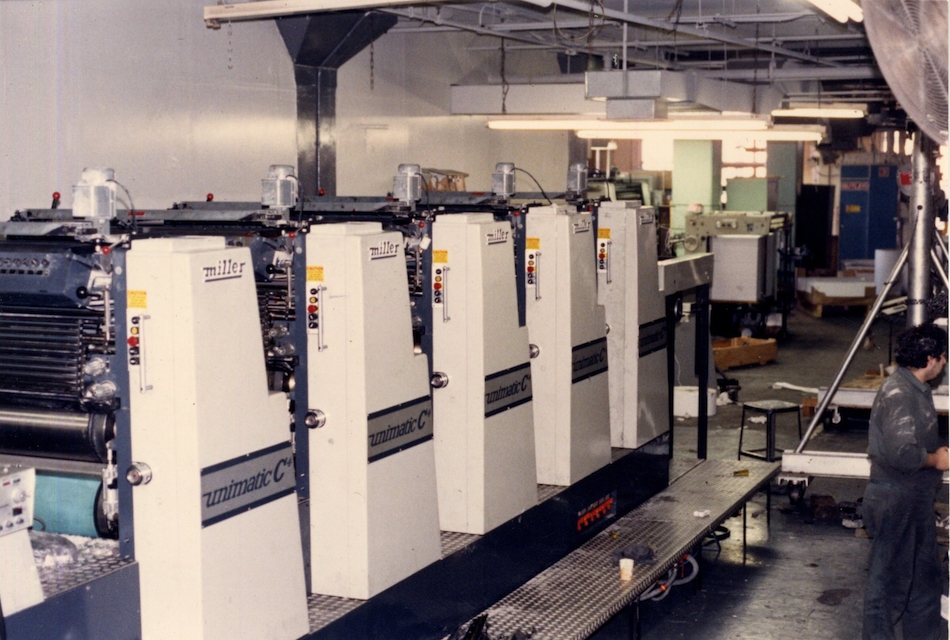 Completion of the Miller TP 104 press at Pandick. Photos courtesy of Nick Howard

I was the only guy not in a suit. It’s 1986, and after picking up a bunch of executives at the airport, here we were all clustered around a press console of an almost-new Miller TP 104 five-colour press. The Miller, a 41-inch double perfector, had barely reached its first birthday. Pandick Inc. was the buyer and one of a close group of financial printers headquartered in New York City. Bowne & Co., Charles P. Young, Sorg Inc., Merrill Corp, and R.R. Donnelley were the other members of a prestigious and lucrative club — the voice of Wall Street. In Bowne’s case, a rich history going back to 1775.

No one would have guessed that the Black Friday market crash of October 1987 would not only unsettle financial markets but would also lead to the collapse of most of these printers. Today, only Merrill Corp. (founded in 1968) and R.R. Donnelly (RRD) would survive. Annual report and financial print was so desirable and envied, and few printers could provide the quality or the 24/7 turnaround time. However, it was also a Wurlitzer that only played one song.

On this early fall day in Waterloo, Ont., Pandick bought the Miller and to celebrate, I took them for lunch in the quaint town of St. Jacobs, Ont.

The Miller sale was a milestone, and we also got the contract to install it. Not everyone was thrilled about that. One of the Pandick executives had brought along his local Miller mechanic, who seemed very unhappy to lose out on the installation.

Now into November, we were busy dismantling the press, which included the removal of all inkers so it could be hoisted up eight floors at 345 Hudson Street in lower Manhattan. Eager to start the install, we had to be onsite bright and early on a Saturday morning. The street had to be blocked off, and a Saturday was the only possibility. Because of the vicinity to Newark, N.J., we decided to fly there and stay across the river in Jersey City. Our first calamity didn’t take long. On Friday night, we arrived at the old Toronto Pearson Airport terminal 1 where a batch of flights departed from the same gate. Not paying attention, we somehow missed our plane by boarding an aircraft headed for Boston! The penny dropped when a passenger, staring at his ticket, told me I was in his seat. What a mess this caused. Not only did we miss our flight but all our baggage and tools ended up in Newark, while we headed on another plane to LaGuardia Airport in Queens, N.Y. A ridiculously expensive taxi ride later got us to our motel after midnight. Things didn’t get much better.

On a sunny Saturday morning, we watched the riggers hoist units that weighed 12,000 pounds each into a massive century-old building in New York’s famous “Printer’s Row.” However, there was a new problem. The riggers refused to take the delivery, saying it was too large to fit the elevator shaft. They insisted – and as I later discovered through their pal, the Miller mechanic – we were forced to disassemble the delivery, but the work had to be carried out at their yard in Brooklyn. This was another delay, which also required massive amounts of electrical disconnections as the delivery panel housed the majority of the controls for the press.

The weather started to turn nasty, as cold winds from the north quickly reminded us we were in November. To argue proved futile, even though we demonstrated that the unit could fit by showing both Pandick and riggers how we’d twist and raise the delivery somewhat like the launch-pad of a V1 rocket. A Pandick limo picked us up and there we were in a dank, unheated and dimly lit warehouse, ripping apart the delivery.

A few days later the press was on the eighth floor, and we busied ourselves getting it assembled; first the printing units, then using a gantry, the inkers, and finally the feeder, delivery and agony of reassembling inkers and delivery sub-assemblies. Each day seemed longer than the last. A few 16-hour days later, the press was ready for power and we were all exhausted, not only of the long hours but due to the travel back to Jersey every night. The routine involved packing up our tools, hiding them, walking to the subway, and a short ride to the World Trade Center to catch the PATH subway that took us under the Hudson River to Jersey City — repeated each morning. Usually, we were the last to leave the plant, and we’d wave goodbye to the janitor, who we later noticed, had bathroom supplies stuffed under his coat.

The production equipment at Pandick was ancient. Most of the bindery equipment looked like it had arrived on the Mayflower. Old Sheridan stitchers, a Juengst gatherer and covering machine, and Baum and Dexter folders covered the vast expanse. The pressroom consisted of old Miller TP-38 perfectors and a couple of Coldset web presses. Our almost-new Miller TP 104 looked out of place. As rolls of paper came off the freight elevator and were carted into the pressroom, the entire press shook from the vibration that reverberated right across the production floor.

The press finally went into production, though days late as a result of troubleshooting the electrics. Everything from rags to tools would routinely vanish each night. We were surprised that all the Miller tools had also grown legs and walked away. Even more, we were rattled to have the foreman chastise us for these loses as if we could do anything about that. Learning quickly, we scattered through the pressroom searching (and occasionally finding) some of the tools. It turned out pretty much all the pressmen either hoarded consumables, or like our friend the janitor, took them home. Lesson learned: Don’t leave anything of apparent value laying around.

One takeaway in rich abundance was the incredible amount of print produced each day. Financial printers seemed to defy gravity with a constant, endless amount of Wall Street work. That would change over the next few years. First, Xerox Docutech industrial copiers eroded the B/W litho press then as imagesetters appeared, whole prepress departments started to vanish, as the Internet eventually lead to the unplanned obsolescence of jobs. Many of the Pandick staff had been employed for decades doing precisely the same tasks. Customer press OK lounges looked more like the lobby of a Four Seasons and making money was as easy as taking a breath.

The Episcopal Trinity Church chartered in 1697, owns a large block of real estate including the building where Pandick used to be. Today, the holdings are valued at US$6 billion. Landlords have a virtually recession-proof business model. As printers started to leave Manhattan for cheaper locals in Long Island and New Jersey, Trinity remodelled existing factory buildings and increased rent for the few that remained, so locals opined that Trinity strongly encourage printers to leave by not renewing leases. The New York real estate business hardly missed a beat and was unaffected by technology trends or the rise of the Internet, as buildings over 100 years old continued to bring in fantastic revenue. Trinity shed no tears seeing the backend of many printers, including Pandick.

Another old printer, Latham Process, was located on nearby Varick Street. I installed a 50-inch two-colour Planeta PZO-6 in the plant back in 1983. Latham was a museum of printing machines even back then. Anchored by a George Mann 56-inch perfector and pre-war Plamag web press, Latham had all the work it could handle, including printing a daily stock guide for Standard & Poors. Latham is but a distant memory today.

Gentrification was upon New York. Financial printing, while still around, bears no resemblance to the magnitude that existed in the 1980s. Our press sale was just one of the hundreds closed by machinery suppliers all over the world. We, machinery dealers, were also hypnotized by what was immediately ahead of us that we never stopped to realize there could be an end date to this success.

I learned a great deal from that Pandick installation, both during the install and after the Black Monday crash of October 19, 1987, when the Dow dropped almost 23 percent. Never assume anything will stay the same and learn how to improvise when strategies suddenly take a detour. Because of our relationship with Pandick and after seeing the carnage of Black Friday in real time, we proceeded more cautiously into the 1990s, and assumed future economic disruptions would change our world repeatedly. We also thought more about a goal than a rigid plan, and this proved successful.

The print industry has completely changed since 1987. At one time print shops were filled with skilled workers, who took years to learn and develop their craft. Today’s youngsters have grown up in the digital age and are completely comfortable with the interface of operator and machine. They have the necessary skills to produce work on intelligent equipment that simply needs a mouse click to start operating. Production equipment, primarily digital, has a short usable life as we are inundated with even more straightforward to run machines. In Pandick’s day, a machine’s usefulness was measured in decades, not years.

Looking back, I see how businesses such as Pandick didn’t have a chance and were unprepared to navigate future technology shifts and tighter margins. So preoccupied, Pandick saw no need to assume the days of financial printing were numbered. Instead of branching out into other print segments, such as general commercial colour work or buying another printer, Pandick stayed its course. In comparison Bowne never failed by spreading its services, especially in its Canadian operations, and only ceased trading when RRD purchased it.

I still see this type of myopia today. When industry focus is primarily about the mechanics of print or the twists and turns of new colour control tools, that’s a mistake. Running a digital (even offset) press has never been as easy. Colour control and file manipulation is no longer wishful thinking but rather expected on any new machine. Print must exploit the equipment we have and create new products that help our customers sell more. Today’s successful printers are already doing that.

This column was originally published in the October 2019 issue of PrintAction, now available online.