Winnipeg-based LightVisions, which specializes in large-format printing for the retail, display and outdoor markets, has installed what is described as Canada’s first automated Inca Onset S20. 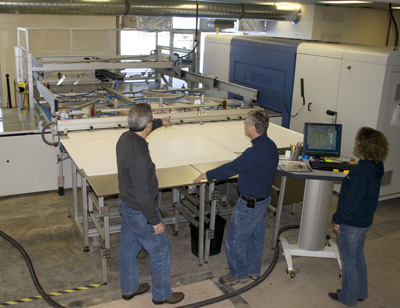 The automation of this particular Onset S20 is found in a materials handling system with the ability to operate in manual, semi or three-quarter mode.

LightVisions’ new machine also includes a speed upgrade, introduced to the Onset S20 back in August 2010, said to increase the device’s rated speed by more than 35 percent from its original speed of 45 beds per hour.

With both the automation and speed upgrade, LightVisions’ Onset S20 will produce around 62 beds per hour.

“Our operators really like the ability to switch over quickly,” said Allan Brooks, President of LightVisions, referring to the machine’s levels of materials automation. “It is very fast, so if you have one 20- to 30-piece job and then another that’s running 500 pieces, you can switch from manual to automated easily. You don’t need the automation for the 20- to 30-piece jobs. Manual works just fine.”

LightVisions was founded 28 years ago and now employs over 40 people in a 38,000-square-foot facility.