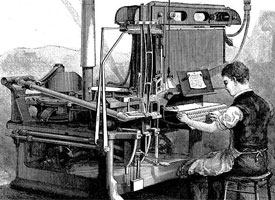 The infamous Linotype Type Casting Machine made its debut in July of 1886 in New York City and radically changed the world of print production. The machine, invented by Ottmar Mergenthaler, will be getting some well-deserved recognition with a new feature-length documentary by filmmaker Doug Wilson.

According to the film’s website:
This film is about a machine from the past, but that does not mean this is a sentimental fact-film lamenting the loss of a technology. We are compelled to dig deeper, and find what the Linotype has to say about the present and future.

A trailer for the film can be seen below. Linotype: The Film is due for release this Fall.

The Mackenzie Printery and Newspaper Museum of Queenston, Ontario has a working example of the Linotype, along with printing equipment dating back well over 200 years. The museum is open daily from 10am to 4pm until September 5th.