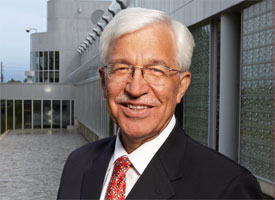 According to a press release about his achievement, Mahabadi arrived in Canada from Iran in 1981 with his wife, infant son, and $15 in his pocket. Today, he leads one of the world’s most-important imaging research centres and holds more than 70 U.S. patents.

The Xerox Research Centre of Canada (XRCC) is primary driver of technological innovation for Xerox, which generates around US$22 billion in annual revenues.

Within the national program produce by Canadian Immigrant magazine, Dr. Mahabadi was first named as one of the Top 75 Immigrants earlier this year, and was subsequently voted into the Top 25 by May 2010. More than 10,000 votes from across the country were cast in the inaugural awards program in 2009.

“There are many individuals that have contributed to my professional success,” says Dr. Mahabadi. “I can’t speak for everyone who has adopted Canada as their home, but it’s been a land of opportunity for me. My culture and educational background were not only welcomed, but encouraged at every level of my career. Xerox is a company that embodies Canada’s inclusive culture, and its diverse approach to innovation continually enriches the company’s employee base, and bottom line.”