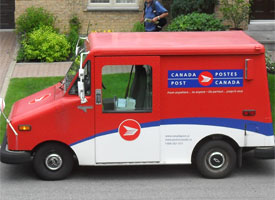 UPDATE June 27: Postal Workers are returning to work across Canada as back-to-work legislation was passed over the weekend, despite the efforts of the NDP to delay it. The Bill to return postal workers back to work passed through the House of Commons after a 58-hour marathon debate, which saw the NDP deploy filibuster tactics in an effort to allow more time for the administration and union to reach a deal.

Bill C-6 was passed by the Senate on Sunday and will officially come into effect this evening. Postal staff have already started to return to work at sorting stations. Delivery staff will resume tomorrow morning.

In the end, the legislation provides for a lower wage increase than the final offer from Canada Post. Talks broke down last Wednesday and the two parties could not reach a consensus in a meeting on Saturday.

According to the CBC, representatives from the CUPW said its members would return to work, however would continue to fight for the postal workers’ rights under the “draconian” legislation. 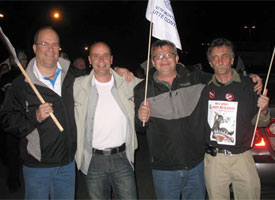 UPDATE June 21: Canadian Postal workers remained locked out of their jobs as the strike enters its third week. Last Wednesday, Canada Post shut down urban postal operations. Pension and social security cheques are being delivered as part of a prearranged agreement between the union and Canada Post.

The bill is not expected to pass until Thursday, from there it would still require royal assent before coming into effect.

UPDATE June 14: CUPW’s rotating strike action has reached two of the largest markets today, with workers in Toronto and Montreal walking off the job for 24 hours.

Last week, due to shrinking mail volumes as a result of the strike action, Canada Post announced deliveries in urban areas will be reduced to three days a week: Mondays, Wednesdays and Fridays.

The CUPW is now distributing leaflets claiming they want to deliver mail, but Canada Post won’t allow them and urging supporters to contact Minister of Labour Lisa Raitt to stop Canada Post’s cuts.

UPDATE June 13: The Canadian Union of Postal Workers has issued a statement accusing Canada Post of aggressively trying to force postal workers out
on a full-scale national strike in order to secure back-to-work
legislation from the majority Conservative government.

“Canada Post is doing everything it can to provoke the union into a
national walkout in the hope that the government will intervene,”
said CUPW’s National President and Chief Negotiator Denis Lemelin.

CUPW claims it offered to suspend its rotating strikes and go back to
work, provided that the expired collective agreement is reinstated in
order to protect members on the work floor, Canada Post management has
refused. CUPW says its offer to call the strike off still stands.

“They are not interested in negotiating with us to end this strike. They
want to force postal workers to take concessions,” said Lemelin. “To
that end, they are suspending postal service across the country, even
where no picket lines are up.”

UPDATE June 9: Canada Post has announced that due to the rotating strike situation, it will be reducing its services, delivering mail only three times a week in some instances. Daily mail volumes at Canada Post have fallen up to 50 per cent since the union started rotating strikes on June 3rd.

UPDATE June 7: Victoria and Moncton are the latest to be hit by the rolling strike.

UPDATE June 6: After failing to reach an agreement with Canada Post, the Canadian Union of Postal Workers has enacted a rolling strike system which has so far seen disruptions in Winnipeg, Hamilton and Montreal. The Union has not announced the target of its upcoming strike locations, but each location has suffered 24 hours of strike action each.

According to the CUPW, the latest Montreal location was chosen “to highlight the problems experienced by postal workers
who are dealing directly with the new technology and work methods resulting from Canada Post Corporation’s $2 billion
mechanization program.”

UPDATE May 30: The Canadian Union of Postal Workers
announced that it given its 72 hour strike notice, meaning that unless an agreement is reached with Canada Post, postal workers will walk off the job starting at 11:59pm on Thursday. The Union has not revealed the type of strike action it is planning, whether it is a rotating strike or a complete job walk off.

The last postal strike in Canada occurred in 1997 and lasted for two weeks.

UPDATE May 24: The Canadian Union of Postal Workers announced Sunday that it does not intend to hold a strike action on May 25th while it continues negotiations with Canada Post. The Union is required to give 72 hours notice before any strike action.

Among the points of contention are wages for new employees, which Canada Post propose to be dropped from $24 per hour to $17.50 an hour. Other points proposed by the union cover health and safety issues as well as hiring practices.

A new agreement would last until July 31, 2014. Unlike many postal systems around the world, including the U.S. Postal Service which has seen losses of US$2.2 billion in the last quarter, Canada Post has remained profitable in the last 16 years.

Pensioners and those on social assistance can expect to receive their checks even if a strike does occur through the use of volunteer post carriers.

UPDATE May 19: Canada Post announced that it will know Sunday whether or not CUPW intends to commence strike action on May 25. Meetings between Canada Post and CUPW continue. Customers can receive the latest information immediately via email or SMS message by registering at www.infopost.ca/customer.

Members of the Canadian Union of Postal Workers (CUPW) have voted overwhelmingly in favour of striking if necessary to gain its demands. The earliest date the CUPW could go on strike is May 25.

“A 94.5 percent strike vote sends a clear message to Canada Post,” said Denis Lemelin, CUPW National President. “CUPW members want a collective agreement that recognizes our work is behind the increases in profits and productivity. They want management to share, instead of attacking our wages, rights and working conditions.”

The CUPW represents more than 50,000 postal workers in Canada. The last collective agreement was signed between CUPW and Canada Post in 2007 and expired on January 31, 2011.

“Canada Post remains optimistic that a negotiated settlement can be reached just as it has in each round of collective bargaining with CUPW since 1997,” said the Corporation in a statement.

“We are confident that we will reach a negotiated settlement because we are offering employees annual wage increases, a secure pension and continued job security. Under the new collective agreement that has been proposed, members of CUPW will continue to enjoy some of the best wages and benefits in Canada.”