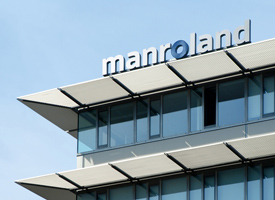 The provisional insolvency administrator Werner Schneider reached an agreement for what is referred to as “Massekredit,” which is similar to debtor-in-possession financing.

“Continuation of production and business operations at manroland is therefore secured. The company can continue to do business with customers and suppliers and we are sending a very positive signal to the market,” said Schneider, a financial auditor. “Immediate action was essential as an interruption of production does harm the company and makes the desired sales process more difficult.”

The new credit facility has a volume of Euro 55 million, which includes Euro 10 million in the form of a cash drawing facility. A further Euro 45 million is to be used as a “partial” mass credit in which the lending banks release part of the forgone loans. The release ensures the required liquidity without the banks having to provide new debt.

manroland states that the financing secures fulfillment of liabilities with customers and suppliers that have placed or received orders with manroland after the company has filed for insolvency. Liabilities originated before the filing will be dealt with as part of the insolvency proceedings later in the process.