More than 1,500 visitors from 75 countries attended manroland’s recent Sheetfed Summit held over four days in mid-May at the company’s facility in Offenbach, Germany. 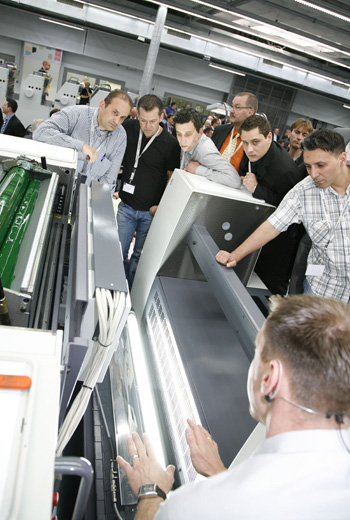 manroland held its massive Sheetfed Summit this month to highlight updates to its technology since the year-ago IPEX trade show in Birmingham, UK, and to introduce some of the innovations it is working on for the upcoming drupa exhibition, to be held in May 2012 in Düsseldorf.

More specifically, during the Sheetfed Summit, manroland highlighted the perfecting system for the ROLAND 900 XXL and its recently introduced ROLAND 700 DirectDrive platform with a production speed of 18,000 sheets per hour and job changeover in less than three minutes.

The press maker also highlighted its autoprint smart technology, designed for sequential production of pre-selected jobs without operator intervention, and ROLAND InlineInspector 2.0, which can analyze 6-point type, while inspecting each sheet, making a PDF comparison, and masking zones for different measuring sensitivity levels.

More photos from manroland’s Sheetfed Summit can be seen on its Facebook page.