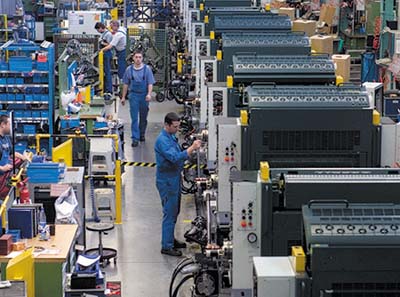 In the Langley report, Manroland Sheetfed is said to have traded in line with expectations to make a small profit on revenues of €314 million, although with internal charges the press builder contributed some €10 million to the group’s €91.4 million profit before tax.

Based in Offenbach, Germany, Manroland Sheetfed delivered just over 100 new presses or 528 printing units during the year to December. “We are delighted with this result which was slightly higher than budgeted,” stated Dr. Peter Conrady, Head of Sales for Manroland Sheetfed. “We have a turnover in excess of our €300 million target with a positive operating profit and this is very good news.”

Langley Holdings plc, a diverse engineering group, reported revenues of €833.9 million for 2013, generating its pre-tax profit of €91.4 million. Group chairman Tony Langley stated that his company’s divisions had performed in line with or ahead of expectations and that 2013 had been another “remarkably successful year.”

Piller, which produces electrical systems for data centres, was the principal driver of Langley Holdings’ 2013 result. ARO, which manufactures welding machinery for the automobile sector, also had what the company describes as another near record year. Claudius Peters, a plant machinery constructor, performed in line with expectations on slightly reduced turnover, while Bradman Lake, a packaging machinery specialist, also performed in line.

Langley Holdings reported net assets of €496.5 million at year end with zero debt and net cash of €278.6 million, after payment of a €25.0 million shareholder dividend during the period.