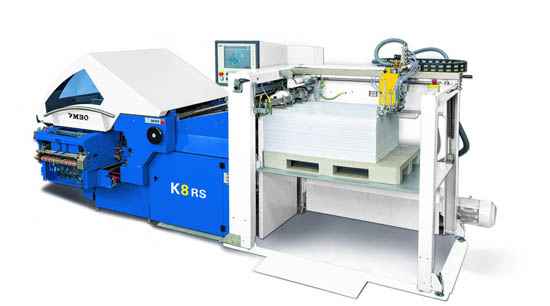 The company describes its K8 RS combi-folder as “the world’s fastest folding machine.” With production speeds of up to 275 metres per minute, the K8 RS represents a 20 percent speed increase over MBO’s previous K8 Perfection folder. The new machine is described as allowing for 1:1 printing to folding production, based on its ability to better match the speeds of today’s modern sheetfed presses.

“The K8 RS defies description in this market segment,” stated Lance Martin, MBO America Director of Sales, who points most predominantly to the increased speed of the K8’s drive motor. “Along with the improved drive system, the Vaculift infeed system was re-engineered for increased performance, and an intelligent sheet control monitoring system has been equipped on all K8 RS machines to ensure that the paper is always under control at these speeds.”

Like its predecessors, the K8 RS can be outfitted with variations of the S-KTL and S-KTZ cross-fold units, as well as an automation package to improve make-ready times.