McCallum Printing Group of Edmonton, Alberta, has installed a new 5-colour Heidelberg SX52 press, plus coater, this March, which joins several new pieces of technology installed by the company over the past six months. 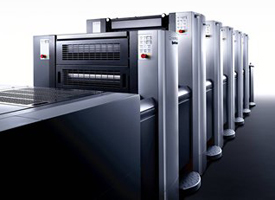 McCallum’s latest round of press and finishing technology upgrades began in October 2012 when a new Horizon folder was brought in, which automatically sets rollers and plates, as well as a new Polar 78 cutting system. The Polar 78 works with products under two inches and handles sheets sizes of up to 23 x 35 inches.

In November 2012, McCallum then installed a Graphic Whizard CreaseMaster, which operates at speeds of up to 8,000 sheets per hour, as well as a new Cito System creasing matrix. Both units have the ability to provide letterpress-quality scoring to prevent cracking when folding. The company continued its finishing department upgrade with a new Horizon 5500 Stitchliner installed in December 2012.

The Heidelberg SX52, one of the first such machines to reach Canada, was recently introduced by the German press manufacturer as a combination of its most modern features from the XL press line coupled with the long-established Speedmaster SM 52 platform.

McCallum trumpets the ability to run up to 24-point board on the SX52, which hits a top production speed of 15,000 sheets per hour. The new press also features Color Assistant Pro for automated monitoring of the ink fountain liner, self-calibration of the ink zones with automatic adaption of the characteristic profiles, and customized ink presets, as well as AutoPlate and the speed-compensated Alcolor dampening system with Vario function

McCallum has been recognized by the CIP4 organization as one of the world’s most integrated printing shops, after the Edmonton company a few years ago received the Jurgen Schonhut Memorial Award for its JDF-enabled workflow.