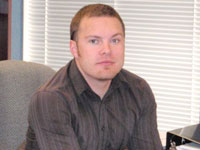 Mark Menzies last week received the Young Printer Award from the Canadian Printing Industries Association. The program, now in its third year, celebrates the contributions of printers under the age of 35 to the industry.

Menzies, 25, is a fourth-generation printer and started working in the family business, Menzies Printers, in high school as a delivery driver and an AB Dick press operator on weekends. After university, he became a CSR at the company’s Edmonton office and has since moved on to the new Calgary office. Today, he holds the role of Vice President of IT and Marketing.

Menzies is active within the Printing and Graphics Industries Association of Alberta, now serving on the board for a second year. He also helped to organize the WorldSkills Competition this September. Chad Friesen was the first-year recipient of the Young Printer Award, while Tod Cober of Kitchener-based Cober Printing won last year.