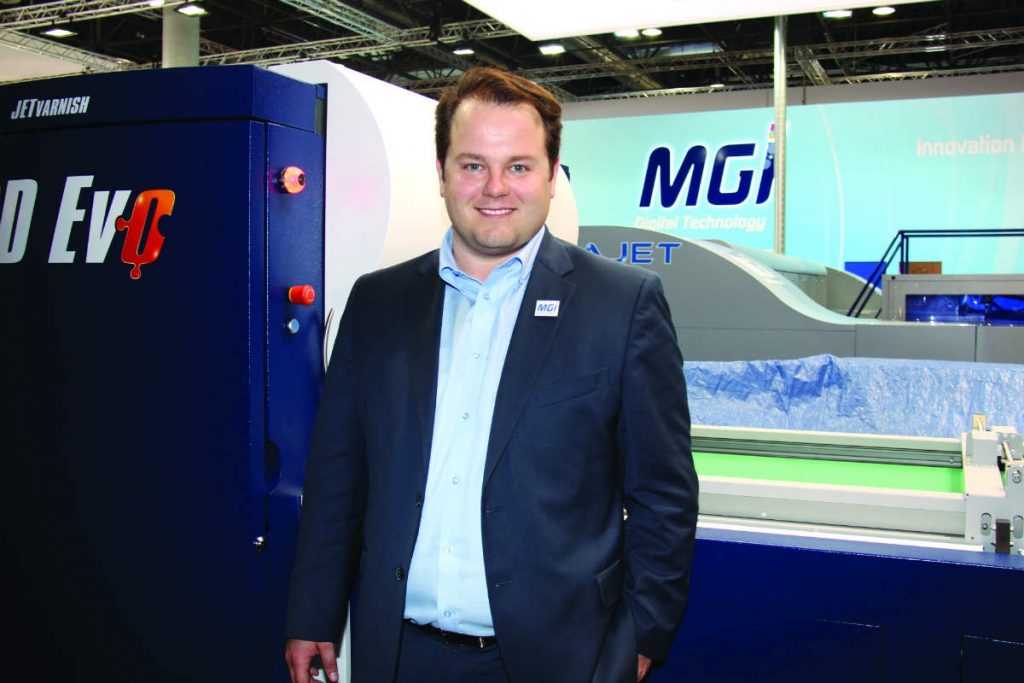 Kevin Abergel, Vice President of Sales and Marketing at MGI USA, has been leading the business development of the company’s rise in North America.

Founded 35 years ago, MGI Digital Technology has made a major impact on the world of printing with innovative digital printing and finishing technologies for enhancing the power of print.

MGI Digital Technology invests approximately 20 percent of its annual sales back into research and development.This astonishing number speaks to the company’s origins just outside of Paris, France, and why it has raised the bar amid  what are now some of the industry’s mostpowerful technology suppliers driving the growth of digital printing.

PrintAction spoke with Kevin Abergel, Vice President of Sales and Marketing at MGI USA, about the company’s mantra of innovation.

How was MGI founded?
Basically it was 1982 when my uncle was fresh out of the military where he had worked on anti-aircraft missile technology and he had learned a lot when it was still really early days for computers. When you look back further, actually, my grandfather was an offset pressman his whole life and on weekends in the summer his three sons all went into that environment to make some extra money. The three brothers who created MGI went into my grandfather’s shop and really learned the business from a traditional standpoint, which is why we have always had an affinity for commercial printers, because basically it is our bloodline – it is where we come from.

Has invention always been in your family?
My great grandfather, on my mother’s side, actually has the first patent for the first pneumatic feeder – 1925 or 1927 – for an offset press and it is up in our offices. We have a very strong and rich history in printing that runs through the Abergel veins. The first products MGI came out with were not necessarily in the print industry. They were some of the first computer programs for accounting, also for hospitals, big old floppy disks. That is really where we got started and then in 1991 we developed our first press – with a three-man team that developed a roll of basically Bristol paper that was being printed on digitally with a cutter just making business cards. It was called the Mastercard.

And then the next generation of Mastercard all of a sudden it went from one colour to two colours to four colours, while also going from a business-card format width to 8 ½ x 11, then 12 x 18, and then we were doing plastics. We have really gone through 13 or 14 generations of engines in our history on the digital press side. That is really how we built up the business from nothing to a business today with a market-cap above 200 million Euros. And now we have partners like Konica Minolta, which really raised the profile higher.

What is the Konica and MGI relationship?
The Konica Minolta and MGI relationship goes back 20 years actually… The base MGI business model has been to use initial Konica technology, whether it is inkjet heads or toner-based print engines, and sup-up those engines. Two years ago we really started to get a closer relationship when Konica Minolta invested 10 percent into MGI – we are a publically listed company – and as a result of that we developed a smaller version of the varnish and iFOIL, called the JETvarnish 3DS, exclusively for their sales network.

Because of the success that we had in that first year of bringing this product to market, Konica was now wanting to distribute the entire MGI portfolio and it was at that point in time that they went from 10 percent to 41 percent, which is a controlling interest in MGI where we have actually launched a new distribution agreement. Konica Minolta is now globally going to market and sell our entire lines of products. From a sales standpoint, it gives us much more visibility and from a service standpoint a much wider infrastructure.

How much has MGI grown in 10 years?
From 2008 to 2016, we grew something like 500 percent during some of the most difficult times in the printing industry. I think when times get tough people need to invest in something that brings a level of differentiation or innovation, so that they can actually compete on applications, not on price. That has really been our mantra this whole time. I do not care about how many pages you are printing per month. How much are you making on each one of those pages? If you are only making four or five percent that is not a good business model, but now if you can go to 60, 70 percent it is a different story.

Why is MGI’s new Artificial Intelligence SmartScanner, AIS, significant?
If I made a die or a screen, for example, I would never really be able to register any of what I am doing to a digital print for the simple reason that digital print moves page to page. The image registration maybe is going to be a little to the left or right, a couple of pixels up, a little skewed – every page is going to come out basically in a different position on the sheet.

So the most important thing is being able to move up, down, left, right and custom fit every single page by comparing it to the original PDF of the print file and seeing where the moves are. The key point here is that AIS is going to be creating – using artificial intelligence – a topographical map of your print. By comparing that live with the actual PDF of the print file, it is going to be able to stretch out all those points where maybe there is high ink density that shrunk the paper or maybe you laminated it so you have a severe slip, stretch or a fan. In screen printing maybe it would take me 20 minutes to stretch my screens out manually to get my fit right and I have to spend a lot of sheets to get my fit correct to be able to make up for all of those deformations once it is out of the press.

The scanner does away with all of that. Number one, your first sheet out is going to be perfect. Number two, you do not need that professional eye to understand where your stretch is in your sheet. It is all being done automatically as touch-less as possible. When you mix that in with the variable data barcode reading system… Not only will it varnish and foil the right image, but it is actually going to custom fit and custom register each one of those sheets as they are moving through. It has never been done before.

How much data is being processed to leverage the AIS topographical maps?
That was one of our biggest problems. If you look at the actual computer system that is just running the scanner alone it is basically doing five teraflops of information per second. It is a lot of information being crunched to be able to pull up the right file, trace the TIFF from the PDF, then be able to compare that file live to the actual print and be able to do all of the modifications automatically. For me it is the coolest technology we have ever done and we have done some pretty cool things.

What MGI technologies excite you most?
I also think that the fact that we have a B1 JETvarnish and a roll-to-roll JETvarnish or the fact that we are actually putting foil down with toner are all really fascinating products. I am most proud of the [AIS] scanner, because I know how much work went into it, almost four years of nonstop development and to see it actually work, knowing that it has been the unicorn. That was the codename for it, The Unicorn, because everybody was talking about it internally and hoping we would one day see it work.

What MGI technology is having the most market penetration?
Right now, the Meteor is having a large amount of success because, at the end of the day, it is still a digital press that can do all of the commodity stuff. But then you turn on the iFOIL and you start running envelopes or plastics or PVCs, or long formats, and put the foil down and it suddenly boosts your added value.

On the JETvarnish side, I would say that 95 percent of the people who are buying this equipment are getting into varnish and foil for the first time in their history. So from a market penetration standpoint, we are having more placements with the Meteor, but the JETvarnish is significantly up compared to previous years because I think the market is finally starting to accept digital embellishment. Out of all the JETvarnish products, we are having an incredible amount of success with our B1 JETvarnish and iFOIL… it really allows us to go after a whole new customer segment which is the packaging converter.

Is packaging ready for MGI’s digitization?
Packaging wasn’t one of our priorities. For the past 35 years, we have focused on commercial printers, but the packaging guys are the ones who came to us and pulled us into that market. The more we did research, the more it made sense for us to develop a 29-inch JETvarnish to be able to do those XL sheets and today that is our number-one selling unit and that is for the packaging convertors. A lot of commercial printers are trying to find ways into digital packaging as well, because, according to Infotrends, there will be 41 percent growth over the next two years in digital folding cartons. I do not know if you could show me one other statistic in our industry that is as incredible as that 41 percent.

How is MGI technology suited for labels?
I read a stat from LPC that said by 2020 three out of four new label presses will be digital. Most importantly, [with MGI technology] it not going to cost you a lot of money to varnish and foil jobs. It is going to be a low-cost job which you can still charge a premium for. The brands are the ones who are pushing it that way, which is a big part of what we do to educate the brands on the advantages of digital and being able to do this kind of work.