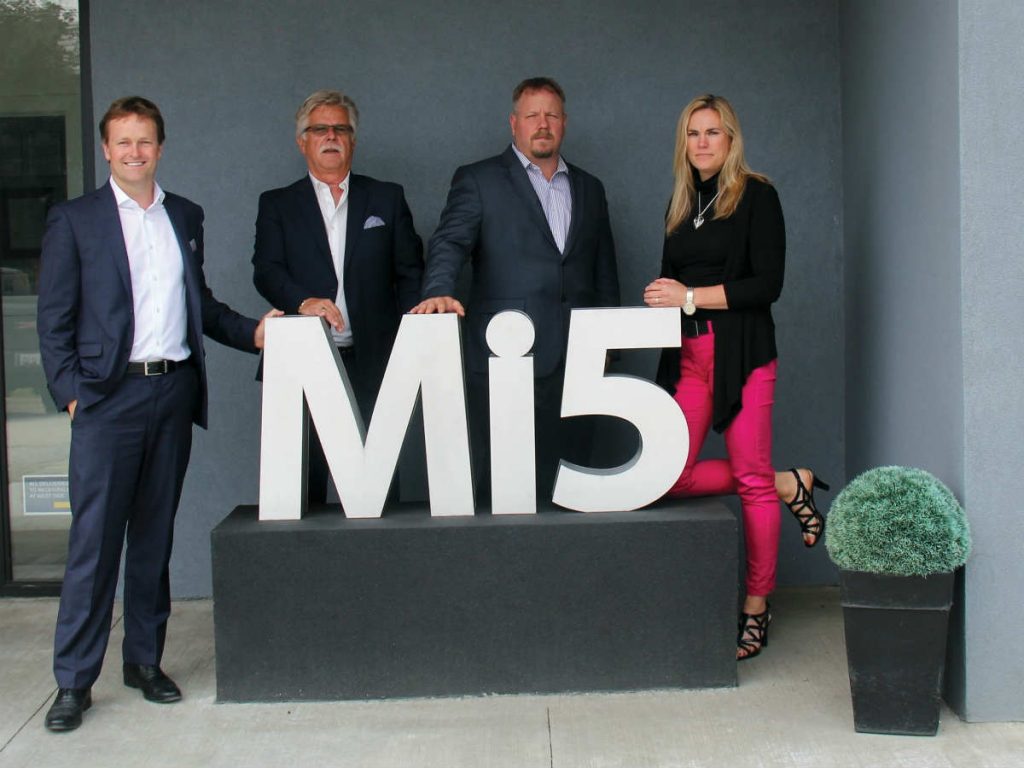 After a decade of growth and acquisitions, Mi5 Print and Digital has become one of the most formidable printing operations in Greater Toronto, now housed in an 180,000-square-foot facility.

Mi5 Print and Digital Communications Inc. began life 14 years ago as one of Canada’s first all-digital prepress bureaus. The importance of that history is immediately seen when you walk through the front offices of its new 180,000-square-foot facility, designed from the ground up by the executive team, and onto its production floor.

Dead centre in Mi5’s digital printing department, which is separated from the 40-inch litho area, sits a large prepress room, open to the production floor by a glass wall stretching more than 30 feet across its front.

Brightened by 90,000 gallons of white paint, the digital department – nicknamed The White House – holds a range of small-format Heidelberg offset and Xerox toner presses, as well as industrial large-format inkjet systems from Inca, Fujifilm and Scitex. Mi5’s digital department is built for redundancy and peak periods with two of most every imaging system, even compressors and back-up generators are duplicated.

Next, you will notice Mi5’s receiving and shipping doors at opposite sides of the building, accommodating two and four 53-foot tractor-trailers, respectively. Excited to finally have a blank canvas after moving through a range of existing plants, Derek McGeachie, Mi5’s founder and CEO, and Steve Tahk, Executive VP and GM, often worked late into the night determining how print would flow through the building, west to east. To ensure work never moves backward and always toward shipping, the executive team – after some healthy debate – decided to forgo marketing atheistic in favour of efficiency, which is literary measured in operator footsteps, by facing its Xerox presses away from the entrance.

Walking past the prepress unit and into Mi5’s main litho department reveals four 40-inch Heidelberg presses, including 8-colour and 10-colour perfectors equipped with roll-to-sheet and two 6-colour UV machines. A pad for a fifth 40-inch sits open with electrical ready to go. Eight folders on the opposite side of the aisle signal all of Mi5’s full-size litho work also flows west to east. Toward the back of the building, it is then easy to pick up a huge postpress configuration, with three stitchers and 21 pocket folders, as well as the tail end of a full-size web press. The 2006 Heidelberg M130 was delivered in January 2017 and scheduled to be operational by the end of July.

After starting up in the back of an industrial garage with a 5-colour press, Mi5 has been transformed into one of Canada’s largest privately owned printing operations – with more than 150 employees generating revenues of $29 million in its most recent fiscal year. Mi5 has been recognized as one of Canada’s fastest growing companies nine years in row on the Proﬁt 500, which measures businesses on five-year revenue growth. Through a decade-plus of acquisitions and technological investment, Mi5 has secured the work of leading brands and caught the attention of Toronto’s print community as an innovative shop with press capacity.

Print investments
Mi5 began putting the Heidelberg web press together in March, after 17 cement trucks were backed into the building to directly pour its pad. “This machine has been immaculately maintained. It is probably the best used press I have ever seen over my years in the industry,” says Tahk, who holds an ownership position in Mi5 with McGeachie and Chief Visionary Officer Sheryl Sauder. Tahk explains even the rollers on the 40,000-iph press look like they were put in last week and that the only problem found during installation was a drained battery on a PLC programming unit – basically a watch battery.

“We are in the process of creating an ink series for it. We are going to bring ProBrite to heatset,” says Tahk. “It is a full web so we can now offer circulars to fashion, food and cosmetics clients who need a superior colour gamut.” Tahk, who began his career with ink manufacturer huber before helping to manage large plants with Grafikom, Quebecor and Matthews, Ingram and Lake, is one of the country’s leading colour-control specialists. He was instrumental in the development of Mi5’s unique ProBrite, MetalMaX, MiCote and XLCote ink and coating offerings, which helped to secure the print work of colour-critical brands like Starbucks.

“ProBrite came about through some considerable amount of research and development. We were actually looking at a seven-colour series… but the cost of three extra specials and taking them off the perfecting machines didn’t make it a viable product for most clients.” Instead, Mi5 created its own four-colour process series leveraging intense pigments and internal algorithms. “The ink is expensive, but you can take ordinary substrates at a very reasonable cost and make something pretty spectacular with it. A lot of times we’re taking customers off that number one sheet, bringing them down to a number two, or even a number three sheet, and giving them a far better product.”

Given common industry estimates of ink being three percent of the cost of a print job and substrates 40 percent, Tahk explains the strategy of doubling ink costs in favour of less expensive paper allows Mi5 to print a superior product with competitive pricing. The same ProBrite approach will soon be applied to the web offset world, in addition to Mi5’s growing interest in packaging, which includes the use of UV ProBrite for printing direct to substrates and also laminating corrugated. “I would say at least 30 percent of our clients have used it on one project,” explains Tahk, “and there’s a number of clients who use it on a regular basis.”

Research and development has always been a part of Mi5’s strategy to attract and retain clients. In recent years, its R&D effort has focused on developing online portals to drive efficiency for a range of print campaigns. With the recent addition of large-format programs, Al Monteath, Executive VP, Sales & Operations, estimates Mi5 has now developed more than 200 print portals for its clients. Monteath joined Mi5 approximately two years ago and played a major role in establishing the company’s new building. He orchestrated the massive move, which included 86 pieces of equipment, without work interruption.

“I have been in this for over 40 years, with five plants, so I have a lot of experience,” says Monteath. “One of the main reasons I came here at this point in my career is that things were changing and all of a sudden I found a group who believes print still does matter and there is a better way to do it – we invest in technology and we invest in people.”

In addition to its skilled operators, running challenging applications, Mi5 now has a department working exclusively on client-facing automaton, front-end design, software integration and programming. “JIT [Just In Time] only started six or seven years ago and it hasn’t taken over in all firms,” says Monteath, describing a recent print audit for a potential client who ended up having more than $300,000 worth of useless inventory in warehouses across Canada. “We set up over 25 portal entries for them and their people just go on 24 hours a day to order 200, 500… we are doing it all JIT, because of our capacity here.”

For another large client, Mi5 was able to eliminate what had become known as Reprint Wednesdays based on a national instore signage and fulfillment program, which the print executives are hesitant to share in greater detail. “We focus on what is important to the client,” says Monteath. “We’ve had some new clients that have come on board, who we’ve been working on for the last year and a half, that have really come to fruition.”

Mi5 now produces about 90 percent of its clients’ work internally. “We’re doing more work with the customers that we’ve always had and the key really has been the penetration into those brands with the additional capabilities we have here,” says Tahk. “The expansion of the plant has paid off… Derek has always been the one pushing for innovation – new products, new ideas and all-around delivery of a high-quality customer experience.”

Future investments
McGeachie was born into a printing family and recalls being around a pressroom since the age of eight. Today, at age 45, he understands the dynamics of printing as well as any seasoned executive. “I am a relatively young guy and it is a longer-term play,” says McGeachie, who invested $13.5 million for the new building and improvements, after renting a portion of Mi5’s 85,000-square footprint in Markham spread across three shops.

“I think we are watched – absolutely –  and the last 12 to 24 months were exceptional, so a lot of industry players will be asking what are they doing. Some of them might be hopeful that we stub our toes,” says McGeachie. “We have been in business 15 years now and have been profitable every single year. We are a good company. It is a solid shop.

“Any money we put into the building is going to be ours and we get to enjoy the slow appreciation of the building, which is nice, but that was kind of secondary. It was more to stabilizer our production footprint,” says McGeachie. He notes the importance of leveraging Mi5’s unique technologies like ProBrite to set itself apart with clients, but the new building also provides purer production efficiency. “You have to be a low-cost producer or you are going to be in trouble.” Mi5’s current workflow initiative, led by Tahk, is integrating a full Avanti Slingshot MIS installation and tie together its new plant.

“Mi5 is one of my children basically… it is important to me,” says McGeachie, noting they have already gained a permit to expand by another 30,000 square feet. “We are here to stay. This will be our last move. It is a big enough plant to support Toronto, Canada, North America and it is where we want to be.”