Pal and Robbie Dhanju, brothers and co-owners of Millenium Printing, finalized the purchase of Mississauga-based KingsWeb, which includes the prepress-focused Queenstone Services and bindery/fulfillment-focused TWS operations. 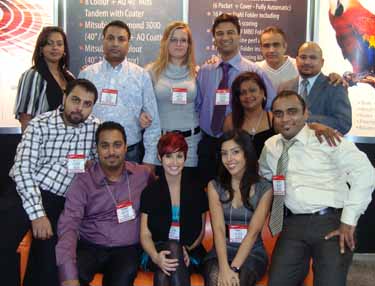 As opposed to an asset purchase, Millenium on April 29 opted to buy the entire 50,000-square-foot plant and all of its operations, because it runs a Mitsubishi-based pressroom like KingsWeb – in terms of sheetfed. The main reason for the purchase, however, was for Millenium to move into web-offset production.

“We were looking for a web [offset] machine for quite some time because there was a big need, especially for us,” says Neeraj Gupta, Millenium’s Marketing Manager. “Whenever we were doing some big runs it really used to hamper our production on the other jobs.”

Back in March 2010, KingsWeb closed its doors after 25 years of operating as a family-run commercial printer. At the time, the company had approximately 70 employees. “We are trying to catch up with some of their existing staff,” says Gupta, “because the company was off for two months and a lot of them have already been placed elsewhere.”

As a trade printer, Millenium is very tight with Toronto’s print-broker community and expects these relationships to drive a lot of work onto its 6-colour Mitsubishi web press, which is uniquely built to handle both heatset and coldset work. Millenium also runs a unique 8-colour, 40-inch sheetfed press, after purchasing a tandem-designed Mitsubishi DIAMOND 3000 about two years ago.

“It has four bottom units and four top units, so the sheet flows straight,” says Gupta, as he explains why Mitsubishi’s tandem press was chosen over a more common perfecting design. “A lot of times people have problems with marking, especially on thicker stocks when the sheet flips. With our press, there is no marking because the sheet is going straight through.”

When Millenium purchased the Mitsubishi DIAMOND 3000, Pal and Robbie Dhanju moved into a new 40,000-square-foot plant in Concord, Ontario, which highlights the company’s steady growth over the past five years. “We were basically doubling our sales with every move,” says Gupta. After founding Millenium a little over 10 years ago, in a 5,000-square-foot Woodbridge plant with a 25-inch Heidelberg, the brothers made a significant move by purchasing their first 40-inch Mitsubishi about five years ago and moving into a 12,000-square-foot, Markham-based plant.

While Millenium will remain headquartered out of the Concord plant, the company basically doubles its size again with the purchase of KingsWeb and, in particular, the full-size Mitsubishi web. “For us, it is really a feather in our cap because [a web press] was the only thing missing from our basket,” says Gupta. “We are still deciding whether to carry on with the KingsWeb name… or if [at the KingsWeb plant] we should use the Millenium name, which is a very strong brand in the trade circle.”