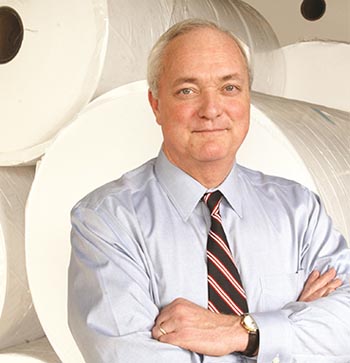 Mohawk expects to produce 500-million envelopes annually in South Hadley, Massachusetts, when the papermaker, described as North America’s largest privately owned manufacturer of fine papers, envelopes and specialty substrates, takes over an 112,342-square-foot early in the New Year. The facility is expected to be fully functional by the end of April 2015.

The announcement comes after the Massachusetts Office of Business Development Economic Assistance Coordinating Council voted unanimously to approve Mohawk’s application for a special tax assessment for the facility. Mohawk intends to enter into a 7-year lease agreement.

“Our plan to create a new envelope converting facility in South Hadley, Massachusetts represents our commitment to further growth of Mohawk’s envelope business,” said Thomas O’Connor Jr., Chairman and CEO of Mohawk. “Since January (2014], we have committed to investments of nearly $5 million in new envelope converting equipment and facility upgrades, and the creation of 100 new jobs for skilled envelope workers. Our envelope business is vibrant, rapidly growing, and we are uniquely positioned to serve our customers with fast delivery, exceptional integrity, and the highest quality envelopes available in the industry.”

Mohawk plans to invest up to $2 million to retrofit the South Hadley facility, including upgrades to electrical systems, installation of air and vacuum lines, and the purchase and installation of envelope converting and manufacturing equipment.

Mohawk expects to produce over 500-million envelopes annually at the new facility. The site will also feature warehouse space to service the company’s customers along the East Coast and Mid-Atlantic regions, as well as overseas businesses.

“We selected the South Hadley location because the layout of the building is ideal for our manufacturing needs,” said Bob Scammell, Mohawk’s Senior Vice President, Strategy and Business Operations.  “The site is essentially move-in ready and requires minimal construction prior to becoming operational, and there is an abundant pool of highly skilled envelope workers in Western Massachusetts.”

Approximately 40 new employees will be hired to staff the new South Hadley facility, which will operate five days a week, three shifts per day. Mohawk also owns and operates a one million square-foot paper and envelope converting facility in Ashtabula, Ohio, which produces 1.5 billion envelopes a year.

In early 2014, Mohawk grew its envelope operations at its Ohio facility by adding 75 new employees to a total of 200 and expanding operations by investing millions of dollars in converting equipment upgrades.