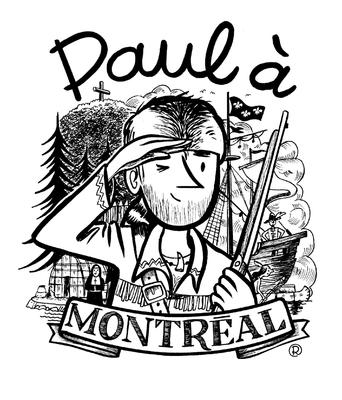 Les Éditions de la Pastèque, in collaboration with the Society for the Celebration of Montréal’s 375th Anniversary, are producing a project called Paul à Montréal, which will be part of the city’s 375th anniversary in 2017.

La Pastèque will create an urban walk inspired by the Quebecois series called Paul, a comic strip created by Michel Rabagliati, who will direct the Paul à Montréal project. The project will be heavily driven by print, including a dozen panels that will be scattered throughout Montréal.

From one panel to the next, the reader, guided by a booklet, will discover the streets of a Montréal neighbourhood. This narrative and interactive journey will extend mostly in the district of the Plateau Mont-Royal, a place iconic of the series created by Rabagliati.

“Neighbourhoods are at the centre of Montréal’s identity,” said Denis Coderre, Montréal’s Mayor. “Michel Rabagliati acting as an ambassador is a unique chance for Montrealers and visitors alike to discover or rediscover, through his storytelling and imagery, this cultural landmark of the Plateau Mont-Royal.”

The project will last from the beginning of August to the beginning of December 2017, which also marks La Pastèque‘s 20th anniversary. Before that, it will be presented in Toronto in April and May 2017, during TCAF, and in Lyon, France, in June and July 2017, during the Festival de la bande dessinée de Lyon.

“Being presented in Toronto and Lyon in 2017 right before its deployment in Montréal, this project is perfectly adapted to the Society for the Celebration’s objectives, namely the strengthening of our City’s cultural influence,” said Serge Postigo, Assisting Celebrations Commissary. “With Paul à Montréal, history will come to life for the benefit of the citizens, proving the vitality of our city by means of the comic strip, an art whose popularity and recognition are an ever-increasing part of the Montréal landscape.”

Michel Rabagliati was born in 1961 in Montréal, where he grew up in Rosemont. After a brief foray into typography, he studied graphic design and, from 1981, worked freelance as a graphic artist. He became seriously involved in advertising illustration as of 1988. Since 1998, his graphic novels are stirring up the Québécois “9e art”.

His seven books published so far have made Michel Rabagliati a major figure of the comic strip in Québec. In 2007, the Prix des libraires du Québec granted him a special award in recognition of his works. He was the first Québécois to win the Prix du public Fauve FNAC-SNCF, for Paul à Québec, at the 37th Festival international de la bande dessinée in Angoulême, France.

Les Éditions de la Pastèque has been publishing comic books and children’s albums for more than 17 years. “La Pastèque wanted to emphasize this important event by celebrating the neighbourhood where it developed, and highlighting this wonderful city that we’re so proud to make shine internationally, through the success of our books and the triumph of Michel Rabagliati,” said Frédéric Gauthier, Cofounder of La Pastèque.