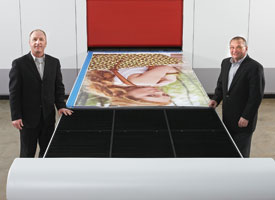 Back in mid-2008, Holland & Crosby
became the first company in Canada to install the mammoth inkjet-based
Onset S70 machine to shift further away from its dependence on screen-printing
production. Now the smaller Onset S20, sold through Fujifilm Canada,
allows Holland & Crosby to provide quicker turnaround, as well as
more gloss options and white-ink printing.

“For the bulk of our work, speed
is an issue, and we’re able to deliver rush jobs on time with the Onset
S20. The Onset S20 has accomplished what we anticipated it would do.
For us it’s not about its capacity-it’s more about our overall efficiency
and the ability to print with white,” stated company co-owner Scott
Crosby. “The Onset S20 has allowed us to finally transition away
from screen printing and we became a completely digital facility as
of February this year. It has also opened the door for a lot of ‘store
opening’ jobs, which are typically personalized.”

Holland & Crosby also invested
in an Inca Digital Onset S70 upgrade program, with a speed increase
said to provide a throughput of up to 7,534 square feet per
hour, equivalent to 145 full-bed sheets (or 435 60 x 40-inch posters)
per hour.

“It was perfect timing for us.
We had an enormous order that required printing white on a coloured
material, so it was important to get up and running quickly,” stated
Richard Labiuk, co-owner of Holland & Crosby. “We already
knew that the ability to print white was key and we were doing a lot
of white work already.

“There’s also the advantage of
less waste,” continues Labiuk. “With screen printing, we had
to print about 50 overs on a 200 sheet run to assure a good job.”

Holland & Crosby was formed in
1997 with the merger of Holland & Neil Limited and J.W. Crosby Advertising.
Today, the 33,000-square-foot facility provides a range of large-format
services, from creative and structural design to printing, collating,
and packing.