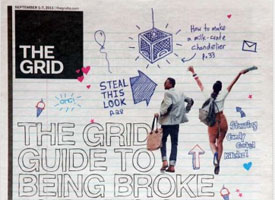 The Society for News Design (SND), has named its winners for Best Designed Newspapers for 2012. Among the winners this year are the National Post and The Grid, both Toronto-based newspapers. The full list of winners are:

“The five publications we selected for World’s Best are very different from one another typographically and stylistically,” writes the judges. “Excelsior uses a bold color palette and a multiple photographs on virtually every page to give it vigor and urgency. FAS and Politiken use sophisticated typography, masterful illustrations and wide broadsheet display to give them an authoritative look. The National Post revels in its narrow page width and tells stories visually as well as any newspaper in the world. The Grid has the feel of an underground paper minus most of the political coverage, but there are engaging story forms on every page that make its readers laugh or shake their head. The Grid’s journalists know their audience and they reach it brilliantly.”

The judges for this year’s competition were:

The Society for Newspaper Design was founded in the United States in 1979 and today includes more than 1,500 members worldwide. Click here to see the winning designs and read the full judges’ statement.