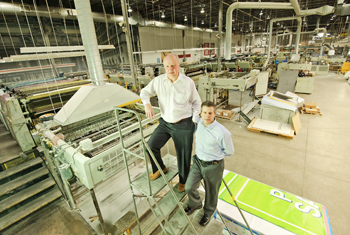 Misale, who assumes the role of Chief Operating Officer, and Malcolm, Chief Financial Officer, purchased their new company back in February, from Adams Outdoor Advertising, which continues to hold 18 locations in the United States. Based in Atlanta Georgia, Adams Outdoor purchased Eclipse Imaging back in 1999.

Canadians Misale, who joined Eclipse 14 years ago, and Malcolm, who joined in 2002, were appointed by the company as co-General Managers back in September 2009. According to its Website, Eclipse can be considered a 56-year-old company, when tracing its roots back to 1954 and the establishment of Hamilton Screen Print, part of Toronto burgeoning Highway 401, economic artery.

“We are excited about the opportunity to lead Eclipse, not only as general managers, but now as owner-operators,” stated Misale, in a press release. “Feedback from staff, customers, and suppliers has been overwhelmingly positive and we are extremely optimistic about what the future holds.”

In the press release, Malcolm estimates that some 15 percent of Eclipse’s annual revenues came from Adams-originated print orders in the Midwest, Southeast, and Mid-Atlantic regions of the U.S.   “Adams Outdoor was a great parent company, and will continue to be a valued client of Eclipse,” says Malcolm. “We are very confident about the future of outdoor advertising and the retail marketplace in North America.”

Today, Eclipse considers itself as an outdoor media company, specializing in out-of-home advertising, transit printing and in-store retail signage. Since 2002, the company operates out of a 70,000-square-foot production facility.