Montreal-based Etiquettes Profecta, led by President Pierre Roberge, is preparing to move into a new 39,300-square-foot facility in nearby Saint Hubert to accommodate its recent production growth and future expansion plans. 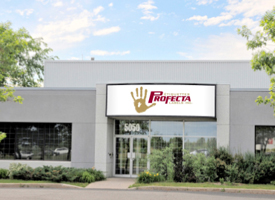 To avoid disruption to its current service and production flow, the company plans to make its move in several phases leading into September 2010. Etiquettes Profecta (Profecta Labels) Inc. was established in 1992 and currently focuses on both flexography and toner-based printing for clients in Canada and the United States.

In an April 2010 article that appeared in PrintAction magazine, writer Victoria Gaitskell describes Profecta’s significant growth over the past couple years, including a 23 percent growth in sales and the opening of 166 new accounts in 2009. Much of that growth is attributed to the company’s move into toner-based production four years ago, which now involves two HP Indigo ws4500s.

Profecta, which primarily focuses on providing labels and coupon projects for the trade, also runs an Aquaflex 8 line for flexography production.