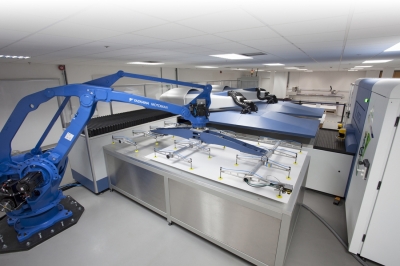 Fujifilm, which is the exclusive global distributor for Inca technology, announced the launch of a new inkjet solution for POP corrugated board applications. The technology package is a combination of the Inca Onset S40i, Fujifilm’s new Uvijet OC inks, and a new handling system that was previewed back in January 2013.

The new Uvijet ink system and system for handling corrugated substrates are designed to address challenges in the inkjet production of corrugated board, including distorted or bowed substrates. Fujifilm points out that because of the absorbent nature of various corrugated materials, there is a tendency for ink to sink in (leaving an uneven matte finish) and for companies to then compensate by over varnishing. Uvijet inks, according to the company, help to overcome these challenges, while the handling system eliminates further potential distortions.

Fujifilm also points out the Uvijet ink system builds on the company’s history of developing screen inks for POP corrugated board applications, as well as its history with UV inkjet inks. The new inks are described as offering a range of finishes from low-glare satin to high gloss in corrugated applications, while also allowing users to store and then later finish printed POP work.

The new handling system for the Inca Onset S40i is based on a fully automatic vacuum-to-vacuum transfer method. It utilizes a robotic arm and camera system to distinguish the location and orientation of a stack (within 0.5 mm), separate the top sheet and transfer it to the vacuum bed of the Onset without any gripping or squeezing, which can leave marks on outer edges.

This system, according to Fujifilm, enables the transportation of uneven materials (which could have up to a 20 mm difference per linear metre in distribution end-to-end), to be held flat on the table with no marks affecting the printed area. According to Fujifilm, this eliminates the need for an excessive gap between print heads and substrate, which helps users maintain text and image quality on difficult surfaces.

When printing is complete, a second automated head also utilizing a vacuum system picks up the printed sheet and drops it onto a delivery stack. With both heads working simultaneously, the productivity of the Onset is increased to over 500 m2/hr.

“This combination of printer, ink and handling system enables our customers in the corrugated display market to be confident that they can produce an even higher class of POP displays than ever before, as there are no longer any compromises to be made,” stated Tudor Morgan, Marketing Manager, Fujifilm. “We are confident that bringing this solution to market will open up new business opportunities for these printers and give the industry a new standard to work to.”