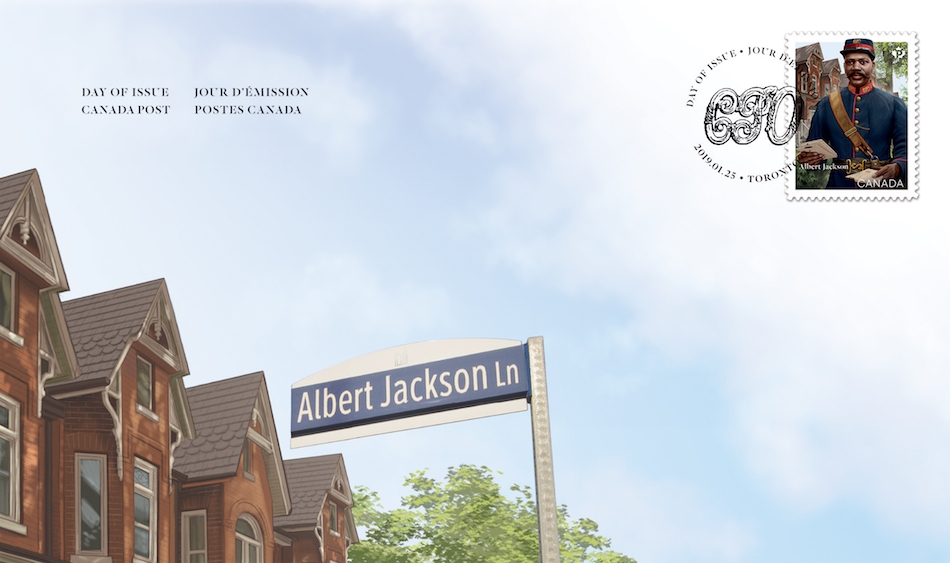 Canada Post today issued a stamp honouring Albert Jackson, thought to be the first Black letter carrier in Canada. Jackson earned his appointment to the civil service in 1882, but faced racism from his colleagues, media and members of the public as he pursued what ultimately turned out to be a successful 36-year career with the postal service, Canada Post explains.

“Albert Jackson’s determination opened the doors for many Black Canadians to enter the postal service,” Ann Therese MacEachern, Chief Human Resources Officer at Canada Post, says. “His courage laid the foundation for the diverse workforce we have at Canada Post today.”

The stamp – designed by Andrew Perro, illustrated by Ron Dollekamp and printed using 4-colour lithography by The Lowe-Martin Group – comes in a booklet of 10.

In a press release, Canada Post describes Jackson was born into slavery, originally from Delaware. “He was just a toddler when his mother, Ann Maria, fled the United States with seven of her children. She made the daring escape after her two eldest sons had been sold. The family arrived in Toronto via the Underground Railroad in 1858 and settled in St. John’s Ward, near Osgoode Hall.

Growing up in Toronto, Jackson was able to pursue his education and, as an adult, he competed for and won a position as a letter carrier in 1882. However, when he reported for work his co-workers refused to train him and he was assigned a lower job as hall porter. After political pressure, particularly from Toronto’s Black community, and intervention from Prime Minister Sir John A. Macdonald, Jackson was soon out walking his delivery route in Harbord Village, where a laneway has since been named after him.”