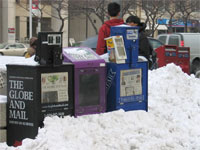 The Globe and Mail has announced special Olympic coverage taking the form of a Sunday edition in the Vancouver region. During those weeks, the paper will become the only 7-day daily in the province.

“The Olympic Winter Games will be an historic moment for Canada and also for The Globe and Mail as we publish a Sunday edition for the first time in our history,” said Phillip Crawley, Publisher and CEO of The Globe and Mail.

The paper will also boost its staff at its B.C. bureau from 16 to more than 50 during the games. The Globe and Mail is the official national newspaper supplier for the Olympic games and is owned by CTVglobemedia, which also owns CTV, the official Canadian network for the Games in Vancouver.

Torstar, meanwhile, will be offering The Toronto Star free at all newsstands and vending machines for the duration of the Winter Olympic Games, until March 1 and while supplies last. The campaign was announced across various media outlets including CFRB and 680 News in Toronto this week.