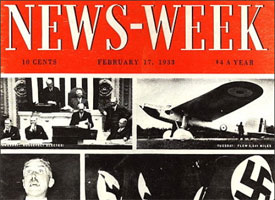 Newsweek, under the new ownership of IBT Media since May 2013, is planning to resurrect its weekly print edition this January or February, just over a year after its former owner moved the 80-year-old property into online-only news.

IBT Media expects to produce an initial 64-page weekly edition in early 2014, according to an article posted yesterday by Christine Haughney, who covers the newspaper and magazine industries for The New York Times.

Haughney spoke with Jim Impoco, Newsweek’s Editor-in-chief, who indicated the publisher is hoping to reach a print circulation of 100,000 subscribers before the end of 2014.

In October 2012, Newsweek’s former owner Sidney Harman, who purchased the media property back in 2010, announced plans to end the historic magazine’s print edition. Newsweek was first published in February 1933 and had been printed by Quad Graphics since 1977.