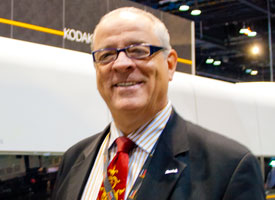 Among other responsibilities, Norlock is to focus on selling Kodak’s Prosper 5000XL system, which was unveiled in May 2010 at the Ipex trade show in Birmingham, United Kingdom. The 5000XL is designed for colour reproduction, while the Prosper 1000 model is monochrome. Both machines are rated for a top speed of 650 feet per minue.