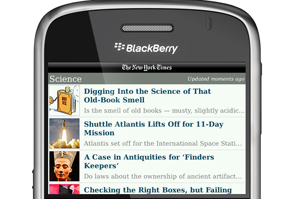 The New York Times Company yesterday announced plans to reintroduce a pay-based metered model for users to access articles from its NYTimes.com property, at the beginning of 2011.

The New York Times newspaper, which feeds NYTimes.com with much of its content, is described as the third-bestselling newspaper in the United States, behind the Wall Street Journal and USA Today. Between 2005 and 2007, The New York Times Company (NYTC) ran an unsuccessful paid subscription service, called TimesSelect, for specific parts of its Website.

New plans for the NYTimes.com metered model comes a couple months after Rupert Murdoch announced that News Corp. is to extend its online paywall model beyond the Wall Street Journal to other prime newspaper assets like London’s Times. The NYTimes.com model is to offer users free access to a set number of articles per month and then charge users once they exceed that number.

“We were also guided by the fact that our news and information are being featured in an increasingly broad range of end-user devices and services, and our pricing plans and policies must reflect this vision,” said Janet Robinson, CEO of NYTC, in a press release.

Beyond its 159-year-old namesake paper, NYTC holds two other significant worldwide entities in The Boston Globe and the International Herald Tribune, as well as 16 other daily newspapers and over 40 Websites.

“Our new business model is designed to provide additional support for The New York Times‘ extraordinary, professional journalism,” said Arthur Sulzberger Jr., Chairman of NYTC and Publisher of The New York Times. “Our audiences are very loyal and we believe that our readers will pay for our award-winning digital content and services.”