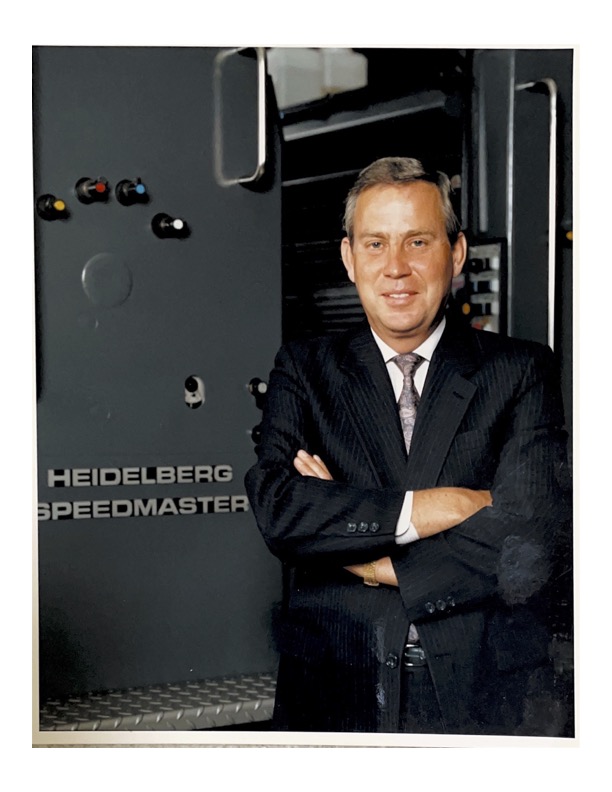 On January 11, 2023, the Sears family lost their beloved “Commander” and patriarch, William (Bill) Housson Sears. Cherished by his wife, Carole, of 45 years; his daughters, Karen (Drew) and Sandra; sons, Tom and Jim (Melissa); and sister, Jane Taylor. He was Papa to his nine beloved grandchildren and Uncle Bill to nieces, nephews and cousins.

Bill grew up in the Forest Hill neighbourhood of Toronto, spending formative years at Ridley College (St. Catherines, Ont.), which held a special place in his heart. He made longtime friends there, with whom he remained close up to the very end. Bill was a passionate supporter of Ridley College, sitting on the Board of Governors from 1995-2004. He chaired the property committee and was president of the Ridley College Association (formerly the Old Boys Association) from 1991-92.

Bill had a successful career in the printing business. He came from a family with a long history in the industry. His grandfather founded Sears Limited, where Bill started and ultimately became president. He went on to found Heidelberg Canada in 1984 with his longstanding partners in Germany. Bill built Heidelberg Canada into a Canadian industry leader, and retired, well-respected and admired, at the young age of 54.

After retiring, Bill was primed and excited for the next chapter of his life. He used his experience to guide others by sitting on the boards of two printing companies, PLM Group in Markham, Ont., and Young Phillips in North Carolina, in addition to charitable organizations.

Next to his family, Bill’s true love was the game of squash. He made many dear friends who shared his love of the game, both singles and doubles. After a long run in squash, Bill co-founded the Master’s Squash League where his legacy lives on.

Anyone who knew Bill knew he had a love of fast cars and NASCAR. He spent years travelling to the Texas Motor Speedway to drive with Dave Starr. By the time he was done, Bill wasn’t just driving, he was giving rides to rookies.

A lover of warm weather, Bill couldn’t get out of Toronto fast enough come winter. After their annual trip to Barbados, he and Carole would spend their winters in Palm Springs, Calif., enjoying the heat and the sunshine. Bill lived a healthy, active lifestyle in California that included tennis, swimming and entertaining a wonderful circle of friends.

If Palm Springs was his winter escape, Manitoulin Island, Sudbury, Ont., was his summer haven. He was introduced to the island in the late 1960s and never looked back. He built a cottage on Lake Manitou, and as his family grew, so grew the cottage. His children spent their summers there and it gave him great pleasure to see his grandchildren do the same.

At the cottage he played tennis with friends, nurtured his garden and sowed his prolific harvest. He taught all his children to play cribbage and (almost) never let them win. He spent countless hours in his lounge chair at the dock, reading or waving at the occasional passers-by. On the island, one never knew when he might stop in to say hello – as is the custom on Manitoulin – but the visit would often fall between the happy hours of 4 and 6 p.m.

Bill led a full and wonderful life with no regrets. He was a man of the people and made friends wherever he went, bringing joy to those around him. He was also a man of his word, placing great value on character and integrity. He will be remembered for his immense generosity, straight talk and humility.

Bill wore his heart on his sleeve, happily sharing how proud he was of his children and he will be deeply missed. His ashes will be spread in Lake Manitou where he will become one with the place dearest to his heart.

The family will hold a funeral service at Grace Church on-the-Hill at 300 Lonsdale Road, Toronto, on Saturday, January 28, at 3:00 p.m. A reception will be held immediately afterward at Rosedale Golf Club, 4:30-8:30 p.m. Carole and his children invite all who remember him to come and raise a glass to Bill.