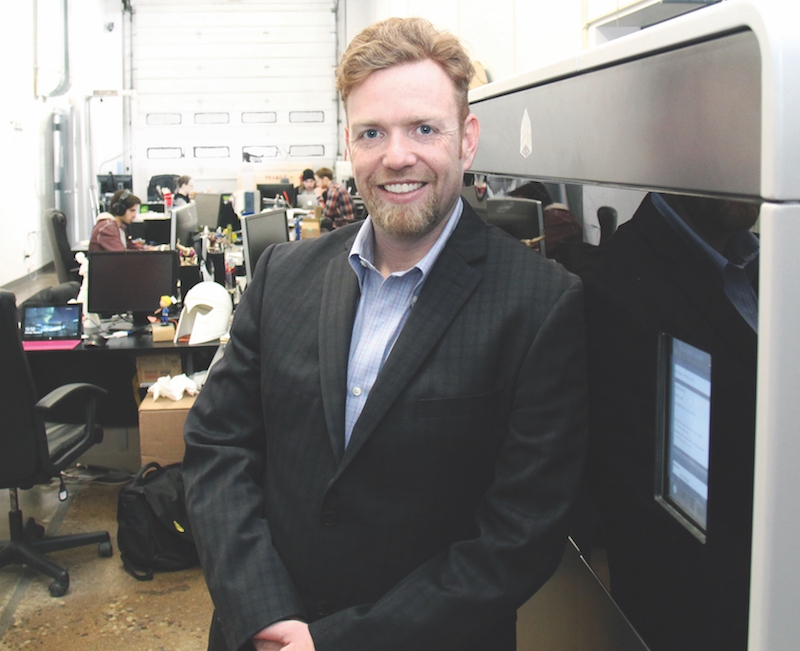 Steve Cory, founder of Objex Unlimited, in his Toronto shop.

Steve Cory of Objex Unlimited shares insight he has gained from almost five years of innovative 3D printing, which stands to revolutionize a range of industries.

Just as most people might be shocked by the invention age of inkjet printing (1951), toner printing (1959), and laser printing (1969), the birth of 3D printing traces back to 1983 despite its new stature as the beginning of a third industrial revolution, opined by futurist Jeremy Rifkin three years ago. Today’s potential of 3D printing, also commonly referred to as additive manufacturing, is based on its sudden widespread accessibility, akin to the consumer-level arrival of the Internet in the late-1990s despite its 1969 roots laid down by ARPANET.

The availability of mature 3D printing technology now falls into the hands of revolutionary business leaders who take enormous risks to disrupt legacy markets and to ultimately generate new revenue models. In the west end of Toronto, Steve Cory, President of Objex Unlimited, is one such entrepreneur who has been exploring the possibilities of 3D printing since 2011. He has built a worldwide name for Objex developing innovative scanning booths, unrivalled 3D figurines, creative and industrial prototypes, and by diving headfirst into any potential 3D arena his team of young engineers, artists, programmers and writers can imagine.

Growth of Objex Unlimited
Cory found his way into 3D printing after reading what he describes as one of those big-future articles in The Economist, highlighting a 3D-printed chainmail glove and working clock. He became obsessed with the implications of additive manufacturing and for six months researched the sector, attending a handful of local 3D-printing enthusiast meetings.

In mid-2011, Cory, at age 35, had been running his own consulting business for more than a year. A problem solver at heart and a trained mathematician, he had built a successful career by leveraging Information Technology to manage production, including a 100-person plant making sprockets and roller chain; catering facilities at Pearson Airport; and with the document-destruction company Shred-it.

“I was always a good manager because I had better information than anybody else,” Cory says. “I would go get it myself, because I was really good at understanding ERP systems, pulling the data – optimizing it.” Computer Integrated Manufacturing exploded across the business world in the 2000s and Cory in 2009, with the recent arrival of two young children, decided to use his attractive skill set to branch out on his own. He became bored, however, with the tedious routine of sitting around the kitchen table and developing process solutions in Excel.

Cory in September 2011 made a seminal decision to invest around $100,000 to purchase a used 3D colour printer and to lease a 3D plastic printer, followed three months later by his first scanner. “It took three months to complete my first order, which was $200,” he says, “and it took me another two months to sell a $50 order to a guy who still buys from me all the time.” Cory also began to serve as a distributor of 3D technologies to sustain  his more inventive plans for 3D printing. As fate would have it, the second handheld scanner he sold was to an influential Toronto businessman who would soon become a silent partner in Objex Unlimited.

“I wasn’t really looking for a cash infusion at that point,” Cory says. “I was ready to muddle through for the next coupe of years and grow slowly as revenue permitted, because I knew it would take time.” The cash infusion, however, allowed Cory to dream even bigger, broaden Objex Unlimited’s 3D printing assets, and begin to hire and train a unique collective of employees to push the frontiers of commercializing 3D applications.

“My business partner feels a big responsibility to give back and we are both very proud of the jobs that we have created here… 26, 27 jobs and probably 15 of these people would not have jobs like this,” Cory says. “They are extremely intelligent and talented, but maybe they didn’t go to the right school or maybe they are a little too wacky to survive in a normal working environment.” Cory prides himself on the creative atmosphere at Objex, which, to take from his own long-term business mantra, is very likely fostering future leaders of Canada’s 3D printing industry.

“Prototyping is the reason 3D printing exists, because there is nothing better to make one-offs [particularly] if it is a small part with high detail,” Cory says. “When I started Objex there were three or four other 3D printing companies in Toronto all very strong in the automotive industry.”

Understanding it would be difficult to push his way into auto-part prototyping, where engineers supply great geometries but are naturally picky, Cory instead took a risk to focus on more creative 3D printing. As a result, Objex Unlimited is likely the most diverse 3D printing operation in Greater Toronto, probably Canada, running 14 machines. It affords Cory an unprecedented perspective – as both manufacturer and distributor – for what the 3D market can bare.

“There is a lot of really good marketing out there that makes it look like you can get a $1,000 printer and make parts for the Space Station,” he says, adding most people entering 3D simply do not understand its many critical manufacturing nuances, such as how difficult geometries are to reproduce, working with negative space and support materials, or why Z-axis builds provide little product strength. Cory explains any 3D printer between $20,000 and $50,000 is really a starting point to figure out how 3D works.

“A good 3D printer is $100,000 and they go up from there – it is capital intensive,” he says, reinforcing the need to take a long-term approach. Objex Unlimited itself – albeit on a unique path of 3D discover – is only now beginning to realize meaningful return on its investments, expecting to generate anywhere from $5 to $6 million in revenue by the end of its current fiscal year.

Cory explains the growth of 3D-print portals, driven by machine utilization, ganging jobs on a printer bed via online templates, presents significant challenges. “I really feel, that in some ways, 3D printed parts are disregarded by people because they have had bad experiences with them – poor quality, bad results, because everybody is chasing that low cost and lowest cost is not the right way to do it.”

He describes building an aluminum extrusion for a window, as an example. It might take three hours to print the part upwards on the Z-axis, but it can be easily snapped. If the window part was instead built lying down, this would require filling its negative space with support materials (later torn away or dissolved) and it might take seven hours to print, but the part actually bends because its lines are built horizontally on the X and Y axes.

Leading the way
Cory and his team are now a few months into an ambitious project to produce thousands of 3D figurines. Selftraits is an Objex-owned storefront studio on Queen St. West in downtown Toronto selling 3D selfies starting at $120 each. Selftraits leverages one of Objex Unlimited’s key R&D programs, a 3D scanning booth that employs 140 synchronized SLR cameras and vast amounts of intellectual property, from electronics and lighting to focusing tools and data transfer. The system was built by two 24-year-old Objex employees, who are now working on a fourth iteration of the machine, which Cory calls The Cobra and will sell for around $250,000.

“Everybody tells me our photo booth is overkill: ‘Why would you use 140 cameras when 60 is fine.’ It is to reduce the digital sculpting time,” Cory explains. The Queen St. store opened on December 10 and scanned about 300 people to make 5-inch-high figurines before Christmas. “I don’t think anybody in the world could have done that – not just scanned but delivered.” Cory hopes Selftraits will be scanning 500 to 700 people per month this summer. “It is both exciting and scary because we are proving a business model that you can have a free-standing store to make [3D] selfies and actually make money.”

Objex is now working on a mobile booth to scan dozens of people per hour at major events, in addition to high-profile art installations, which will place the Toronto company onto an even bigger 3D world stage.