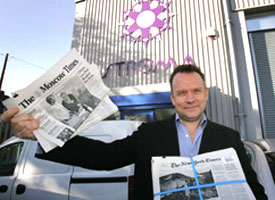 Océ claims a world-first based on inkjet production of colour newspapers through its partnership with Stroma Ltd. of the United Kingdom.

An Océ Jetstream 1000 at Stroma’s London facility will produce titles such as the New York Times, Wall Street Journal, The Australian and Sydney Morning Herald for the local market.

Steve Brown, Managing Director of Stroma, says: “In these testing times for newspapers, digital colour is a real expansion opportunity for the industry. This is something the publishers have been wanting for a long time, and will now be realized. With the Océ JetStream 1000 production press, we have the solution for the future growth of Stroma. Additional publishers are waiting to start printing in London now colour is available. I know Océ extremely well and trust totally. This is a true partnership on a long but mutually beneficial journey.”

Stroma has been in operation since January 2001 and has been a member of Océ’s Digital Newspaper Network for nearly as long. The new machine will allow Stroma to produce in excess of 1,000 copies of a 36-page newspaper per hour, each potentially being a unique copy due to the variable-print options inherent to the inkjet process.

Océ launched its digital newspaper market a decade ago with its Digital Newspaper Network. The company claims around 30-million newspaper copies have been produced globally through this network since 2001.