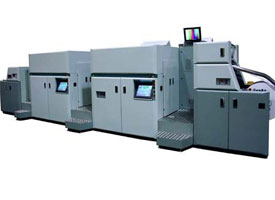 Océ has announced the sale of its 100th JetStream inkjet press to company named Salmat in Australia. The press system made its debut in the summer of 2008.

Salmat has ordered two Océ 2200 MICR machines, the first two in Australia. The company has been a business colour provider since 2006. The company has also purchased two toner-based Océ ColorStream 10000 systems to supplement the JetStreams. They will go into two of Salmat’s facilities in Australia.

“Océ provided the most competitive solution and demonstrated evidence of extensive product knowledge and application globally,” said Nick Debenham, Head of Salmat’s Business Process Outsourcing Division. “They are a leading provider of inkjet color and their size and scalability will ensure we can access service and support locally. This will provide Salmat with a technology edge which will enable us to produce statements without base stationery and add personalization to every document.”

According to Salmat, the company delivers upwards of 60 percent of all business to consumer communications in Australia. The company was founded in 1979 and today employs 7,000 people with operations in eight countries.